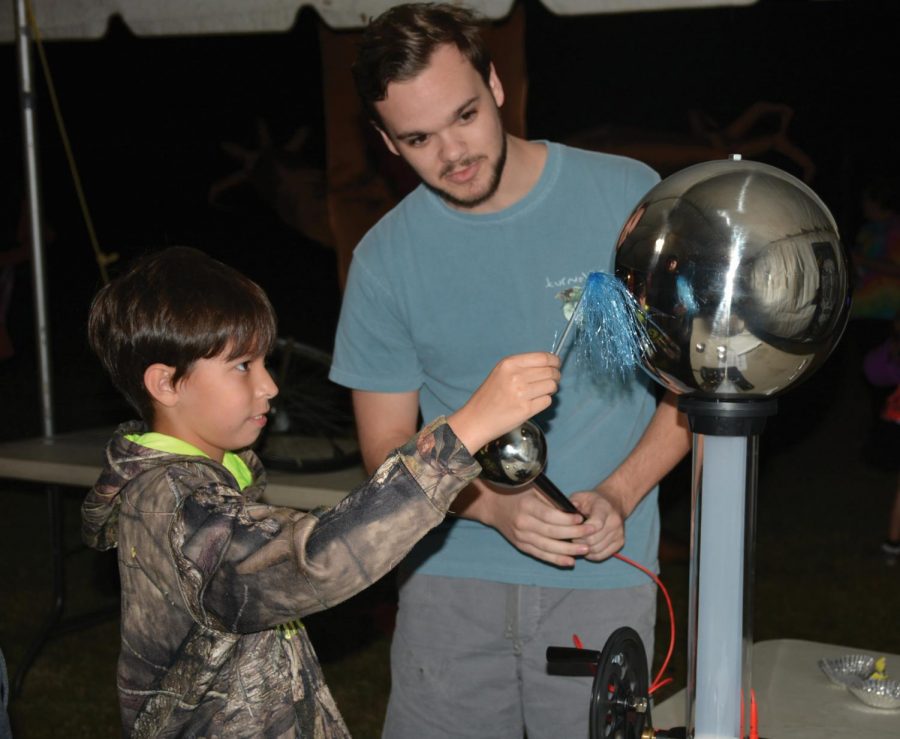 Dylan Hall demonstrates his physics skills for a child at Trick or Treat with Telescopes.

FMU hosted Trick-Or-Treat with Telescopes from 7–10 p.m. on Oct. 25 at the FMU Observatory where students and members of the Florence community participated in telescope and physics demonstrations.

The event included various interactive physics displays for all ages to enjoy. There were also balloon animals and candy for children. The event was organized by Jeannette Myers, professor of astronomy, and student volunteers operated the telescopes and physics demonstrations.

Junior civil engineering major Wesley Segarra Martinec, who is involved with an abridged program in connection with FDTC, said he heard about the event through a seminar by Myers.

“It’s fun because I think it’s good for kids and people you know to come and learn about science and astronomy and get a little feel of it and see if they want to do that for their career and all that later in life,” Martinec said. “That’s why I brought my little sister, to see the telescopes and stars and see if that’s something she would want to do in the future for her life.”

Janely Segarra said she came to the event with her older brother, Wesley Segarra Martinec, because she enjoys astronomy and science.

“I thought coming here would be interesting because I do like looking at planets and stars a lot and I think that coming here and learning more about science stuff will help me in my classes,” Segarra said. “There is just so much science stuff to learn and I just think it’s fun to learn. I think it is very important for little children to see all of this cool stuff because I think it inspires them to see what more is out there.”

Senior Diana Fryer, a double-major in healthcare administration and health informatics, came to the event with her children.

“Since I am a member of the school, I decided to come out and check out the planetarium out here and to show my kids science and the magicalness of it,” Fryer said. “I think it’s important for FMU to have these types of events because it involves the community and kind of helps my children get an idea of why I am still in school and what I am doing and shows them new things in the world.”

Fryer also said she enjoyed seeing what the telescopes revealed.

“I really enjoyed the solar system and being able to look at the planets and the stars with their high-tech scopes and stuff so it’s fun,” Fryer said.

Freddie Mata, a Florence local, came to the event with his children.

“I enjoyed bringing the kids and I enjoyed getting to look through the telescopes,” Mata said. “The kids would probably say their favorite part was the candy, but I think that it’s good that it also teaches them a few things and introduces them to some scientific things. I look forward to coming back to an even like this; the kids enjoy it and we do too.”

Violet Fryer, a second-grader, said she came to the event to look at the stars.