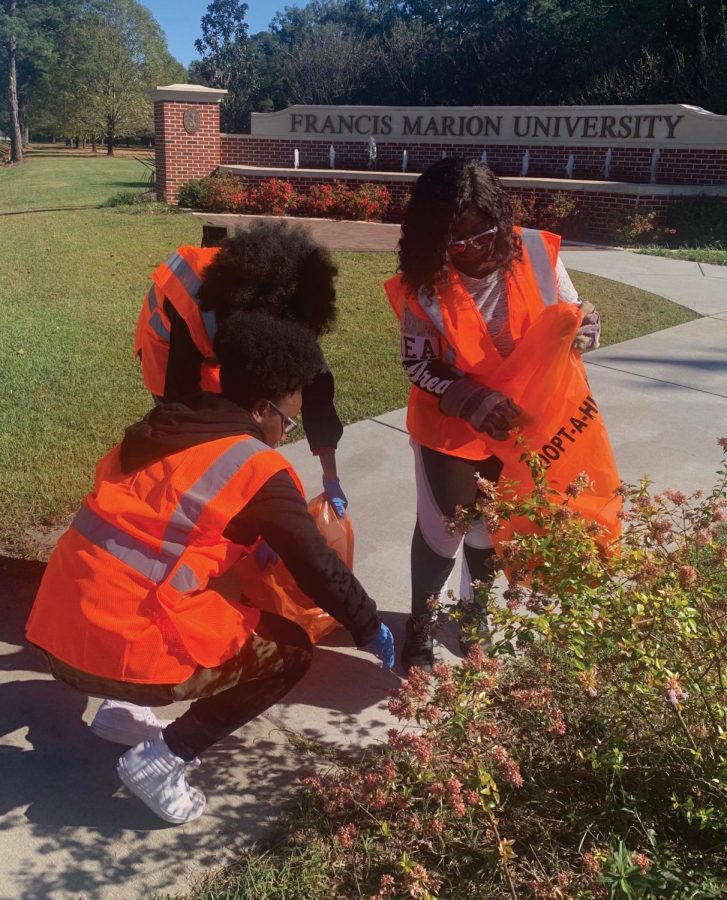 Members of the Green Club pick up trash along the two-mile stretch of highway in front of FMU.

FMU’s Green Club adopted a two-mile stretch of Francis Marion Road and participated in a highway cleanup from 2-4 p.m on Nov. 1.

The club’s two-mile stretch began at the intersection by President Carter’s house on campus. Twelve members of the Green Club initiated the process to adopt the highway and participated in the cleanup.

Alex Hewitt, a sophomore English major, is the Green Club’s current president. She has been a member since her freshman year. Their faculty sponsor is Jesse Sargent of the psychology department.

“We wondered what we could do to actually make a difference on campus,” Hewitt said. “It’s one thing to raise awareness, but it’s another to act. The most effective way to facilitate change is to lead by example. Green Club aims to improve FMU’s sustainability and environmental protection efforts. We recognize that action is at the forefront of the movement.”

Hewitt said she  believes this cleanup was beneficial for their club and for FMU’s campus it not only helps beautify campus but brings people together.

“Not only did the litter cleanup improve the aesthetic of the highway and diminish the amount of harmful waste, but we also grew together as a club and community,” Hewitt said. “I think that our club and our efforts are important because we can foster collective action and volunteerism – two things that are vital in today’s world.”

Taylor Boatwright, an FMU junior and member of Green Club, became involved with the club after the community’s “Keep Florence Beautiful” project this summer, where they cleaned up cigarettes around local restaurants. Boatwright has been a member of the club since the beginning of this semester.

“I think it’s important to raise awareness among students,” Boatwright said. “We are the future and we need to create a better, cleaner world that we can grow old in.”

Rachael Coker, a junior psychology major, heard about the cleanup from Sargent. Although she is not a member of the club, she chose to get out and participate.

“This is one of the easiest ways to be active and give back to our community,” said Coker. “It was a really humbling experience to see how much trash there was. It was unbelievable.”

At the conclusion of the cleanup, the Green Club had collected 20 bags of trash that the South Carolina Department of Transportation picked up and disposed of.