Students have a “thrilling” night 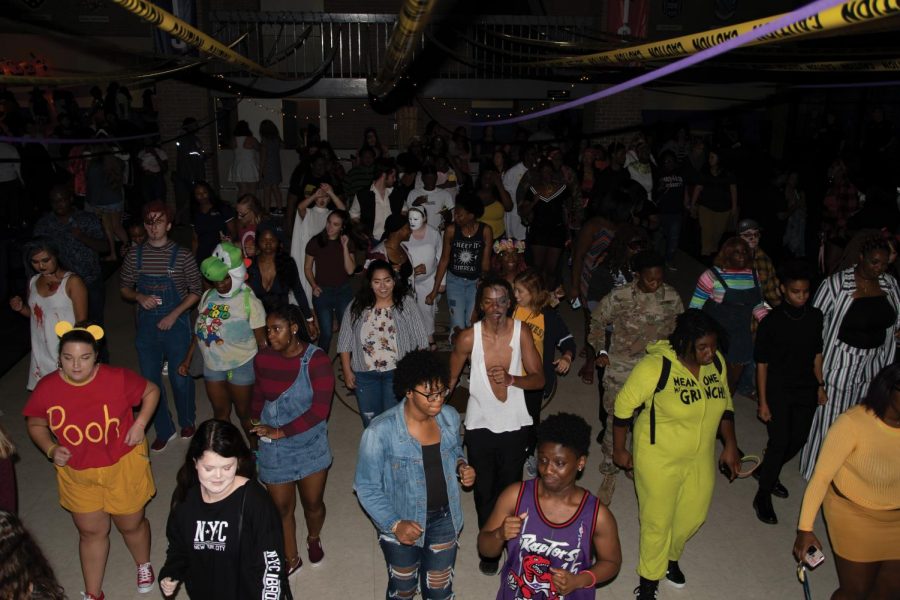 Students dance the night away in the University Center Commons.

FMU’s Campus Activities Board (CAB) wrapped up a week of Halloween festivities with Carnevil, a Halloween party, from 7-10 p.m. on Oct. 31 in the University Center.

The students trickled in little by little dressed in their Halloween costumes. The night was full of laughter, group dances and refreshments.

“Last year I had so much fun dressing up and seeing everyone else’s creativity,” O’Neal said.

All of the students ran to the dance floor when the DJ played the “Cha-Cha” slide.

The different sororities and fraternities also strolled through the night entertaining the crowd.

CAB and the Diplomats set up an escape room with a Halloween theme in the racquetball courts for students to escape from.

While students were waiting in line, CAB members and volunteers handed out waivers for the students to sign.

The line stayed packed the entire night as students went in excited and came out scared.

During the party, students had the chance to take pictures at the photo booth to remember the night. The photo booth was really popular and lots of students went over to take group photos.

Near the end of the night, the contest for costume superlatives began.

The crowd voted a couple dressed as Tiffany and Chucky as the scariest couple costume.

Sophomore biology major Mercedes Bethea dressed up as a scary pirate for the party.

“The best part about tonight was the music because it really seemed to get everyone up and out of their seats and dancing,” Bethea said.

The Halloween party gave students a chance to meet new people and take a break from a busy week of classes.

Junior Kamal Fambare, a political science major, came out to hang out with friends and take a break from his homework.

“I didn’t expect to really meet any new people, but the atmosphere was so inviting that I ended up meeting a few new people,” Fambare said.

Fambare and some of his friends tried out the escape room and said it was scarier than they anticipated.

“This was probably the best part of the night,” Fambare said. “It was actually scary, which I was not expecting. I can’t wait to see what they do next year.”