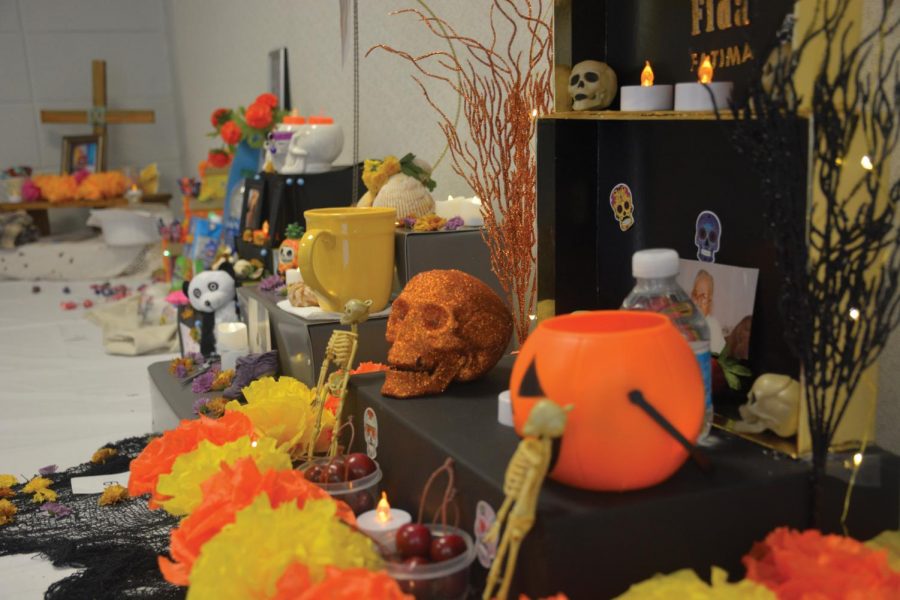 Student altars on display for the Day of the Dead altar contest.

FMU’s Department of Modern Languages brought Día de los Muertos, or the Day of the Dead, to campus with their Day of the Dead altar contest on Oct. 29 – Nov. 1 in the Cauthen Educational Media Center where students built altars to honor their loved ones.

Día de los Muertos is an annual celebration in a few Spanish speaking countries where families gather to remember their deceased loved ones. It is believed that the souls of the dead return during this time to visit their families, homes and former businesses.

“The Day of the Dead is a celebration of the life cycle,” Caldwell said. “It’s not just about death; it’s about being born, living and dying. Those three are on a continuum. It’s the circle of life, and it’s such a beautiful concept.”

To compete in the contest, students created an altar that consisted of a picture of the deceased loved one, candles, calavera skulls, water and something that the deceased liked or that could be associated with them. In total, 14 students submitted an altar and 107 people voted for the best one.

Walter Blaker, a junior history major, was the winner of the competition and took home a gift card to a local Mexican restaurant.

Caldwell said they wanted to organize the event so students could experience the altar-building process first-hand.

“We wanted to have the Day of the Dead altar contest for our students of Spanish, primarily so they could learn more about this festival that is celebrated on the Catholic calendar between All-Saint’s day and All-Souls day,” Caldwell said. “The origins really date back to the Aztecs. When the Spaniards came over to conquer the Aztecs, they came up with a fusion of Aztec tradition with Spanish tradition, hence the Day of the Dead.”

Caldwell also said the Day of the Dead was more of a celebration than a solemn occasion.

“The thought is that every year, during All Saint’s day and All Soul’s day, our deceased loved ones come back and visit us,” Caldwell said. “Really truly, one does not have to practice a certain religion to celebrate it, because in the end, it’s all about memory and remembering our loved ones.”

Caldwell said each year this is the time when families will set out all of the things that the deceased loved when they were alive.

“The altars are designed to offer what are called ‘ofrendas’ or offerings to our deceased loved ones,” Caldwell said.