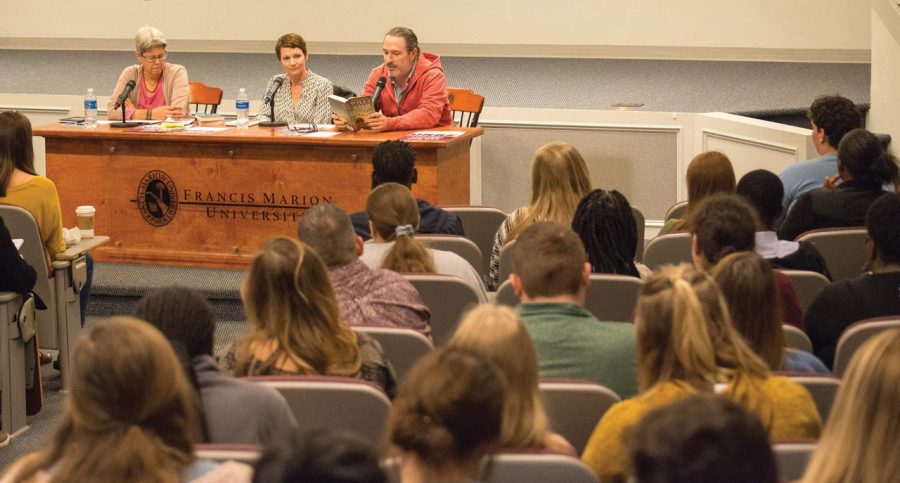 Contributed by the Department of Mass Communication

Writer Wiley Cash reads a portion of his novel "The Last Ballad" to the audience in Lowrimore Auditorium.

FMU held its 14th annual Pee Dee Fiction and Poetry Festival from Nov. 7-8 in the Lowrimore Auditorium with receptions at the Cottage.

Every year, a faculty committee from the English department decides on two fiction writers and two poets who they would like to attend the event. Usually, the event features notable authors who have won awards, and their works are often integrated into the department’s curriculum for that semester, with one of the books being the common read.

Tayari Jones and Wiley Cash were the fiction writers, and Maggie Smith and Justin Phillip Reed were the poets invited to come. This year, Jones was the headline author and her novel “An American Marriage” was the common text.

The authors participated in different events throughout the festival. During the day, there were panel discussions where two writers sat together with a moderator and answered questions about their writing, process, inspirations and their experiences with publishing. The writers also read their works, discussed them with students and signed books.

During one of the panel discussions for the fiction writers, the writers were asked about the inspiration of their plots and how they develop the idea into an entire story. Jones compared her plotting process to having a “budget,” where each character, event and idea takes a certain amount of the budget for a particular book.

“Imagine that every story you’re writing has a budget,” Jones said. “I always think about ‘E.T.’ When you think about ‘E.T.,’ having an alien in your closet is a very expensive budget item. That’s why you can’t remember anything else about the movie. You can’t remember any other people; you can’t remember where it’s set. Everything else had to be really boring because they spent the whole budget on the alien. That’s why when E.T.’s parents came to get him you didn’t even see them, because that would be three more aliens; nobody can afford three more aliens. That’s how I think about plot – plot-twists, outrageous things. But if you’re under-budget, it’s boring. Sometimes, I read the end of a book and I’m like, ‘They had a lot of money left over; they could have bought an alien.’”

According to Jo Angela Edwins, professor of English and co-coordinator of the festival, bringing these writers to FMU allows students to touch base with people who do professional writing.

“For the students, I think it gives them an opportunity to see that they are real people writing these books,” Edwins said. “We’re part of the humanities, and there’s a reason they’re called the humanities; these folks are human beings who have daily lives. It’s not always fun for them to write. They have to force themselves to sit at the computer somedays, just like students do. So they get to see that professional writers go through some of the same things they do, and that they have things to say.”

According to Landon L. Houle, assistant professor of English and co-coordinator of the festival, students can often be inspired in their own work by hearing the writers discuss their process and the difficulties they encounter.

“Even though the writers are generally talking about creative writing, I think our students in our composition classes who may not be doing the majority of creative writing hear that the process is the same,” Houle said. “That there’s an anxiety about a blank page; that it takes careful revision; that oftentimes these writers have other people read their work and give them feedback. They recognize that’s what we do in our classrooms. It gives them a sense of confidence. I feel like it does foster a lifelong learning process.”

Deanna Smith, a freshman nursing major, said attending the festival allowed her to learn about the writers’ process and what their work means.

“I thought it was pretty cool to get the author’s perspective on how they write,” Smith said. “It’s interesting to see how they came to that point because we don’t see all the work that goes before that.”