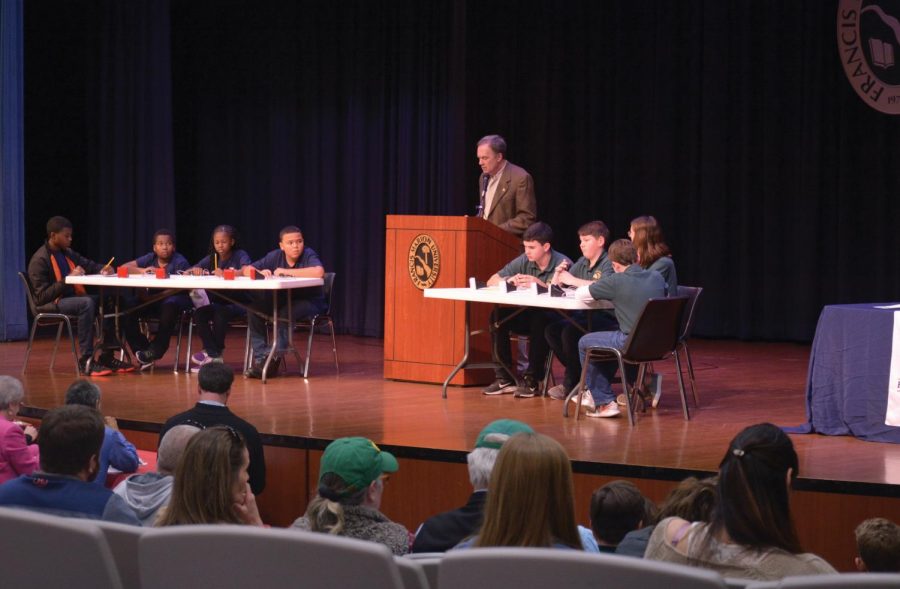 Creek Bridges STEM Academy, seen on the left, competes against Latta Middle School, on the right.

FMU and The Pee Dee Education Center joined together from 8:45 a.m.- 3 p.m. on Jan. 25 to host the annual Middle School Academic Challenge Tournament.

Academic Challenge is a program in which high school and middle school students form teams and study trivia and math related questions. These teams then compete against other school teams in four rounds consisting of 25 questions each. A moderator asks the question and the first team to buzz in answers the question; if their answer is incorrect, the other team has an opportunity to answer. The team with the most points at the end of the four rounds wins.

The first and second place teams for Division I and Division II schools received a trophy and medals for each of the team members.

Cristin Richards, Latta Middle School’s coach, said she was proud of her team, and that this year’s team had four returning team members and seven new members.

“They did everything and more than I expected,” Richards said. “They worked hard and I am so proud of them.”

Holly Hardee, William Middle School’s coach, said she is happy that competitions like these exists for students who have excelled academically.

“It’s a great place for kids who may not be athletic to compete and be a part of something; be a part of a team,” Hardee said.

This year’s guest moderator for the final rounds was Bob Juback, who has been a WBTW News 13 co-anchor for the 6 and 11 p.m. news for the past 25 years.

Juback said he thought events like this were important for middle school students, because it acknowledged the achievements of students who excel at something other than athletics.

“Athletics get so much attention and academics doesn’t always get that chance,” Juback said. “I like that this gives those students a chance to be recognized.”

The teams who took home first place will be going on to compete at the state championship tournament on March 3.