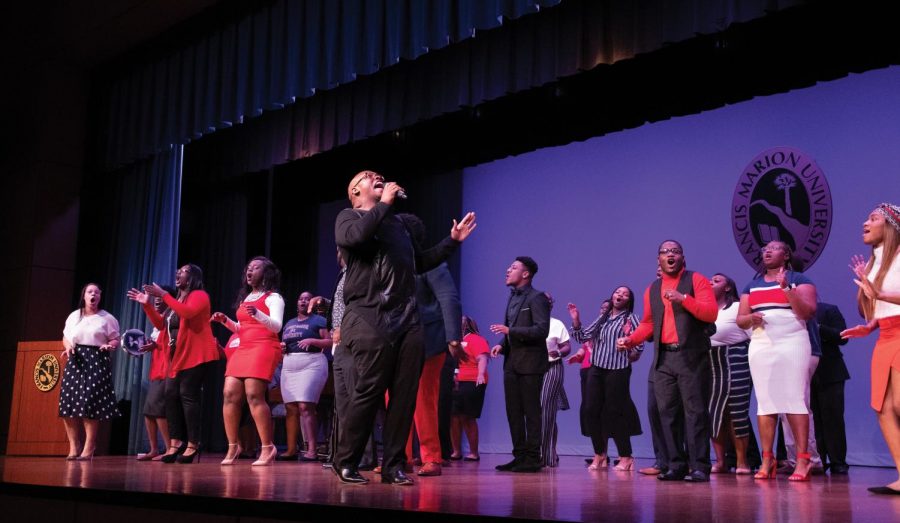 Young, Gifted and Blessed perform at the MLK Day celebration.

Students, faculty and staff gathered together for FMU’s 22nd annual MLK Day celebration at 6:30 p.m. on Jan.16 in the Chapman Auditorium.

Reverend Calvin E. Robinson urged FMU students, staff and families to come together in the way Martin Luther King Jr. both wanted and fought for.

Robinson emphasized throughout the night that King had many chances to leave the South and escape violence, but he chose to stay.

Robinson also drew a parallel between King and Moses to exemplify his leadership.

“Martin Luther King Jr, like Moses, saw his people under the yoke of oppression; he saw his people having to make brick without straw,” Robinson said.

Robinson told the audience King’s courage, conscious and convictions were the only things that could “tell America that she has a malady in need of a cure.”

Robinson reached out to students in the audience and asked them what plans they had to improve the country; urging and challenging them to serve and sacrifice to better our America and bring people together.

“One can’t ignore the issue and say, It is not my concern,’” Robinson said. “One must recognize that there exists a problem that belongs to us all.”

He also urged students to have compassion and passion in order to sacrifice for their people and to be effective.

“When you see a wagon run over people and you go and pick up the bodies, that’s compassion, but when we stand in front of the wagon to stop it from running over the people, that’s passion,” Robinson said.

Robinson also told students that now is the time to stand up and initiate change.