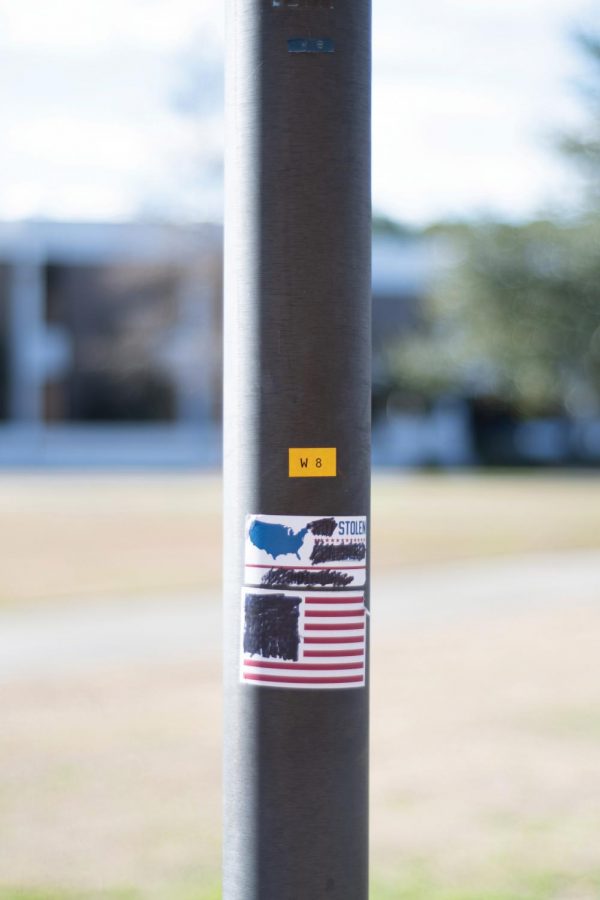 The stickers were from the Patriot Front, which is a known white supremacist and neo-Nazi group.

Chief of Police Donald Tarbell was among one of the officers taking down the stickers.

“It was noted real fast and taken down even faster,” Tarbell said.

Tarbell said that they removed the stickers quickly to avoid a bigger issue.

“That’s not our campus,” Tarbell said. “The university doesn’t tolerate that stuff; that’s not what Francis Marion is about.”

Tarbell said when he got the call about the stickers being on campus he wasn’t worried because he knew what they were and could depend on support from all of the faculty and staff.

“We have this partnership of support staff from the university who realizes that’s not who we are,” Tarbell said. “The workers from facilities really helped out a lot and that’s why we got them down a whole lot quicker.”

However, many students found out about the stickers through social media.

Before campus police were alerted, freshman Jay Hilbourn had noticed the stickers while walking to class and took pictures with his phone.

“I was walking past one of the lamp posts and I was like, ‘This sticker kind of looks weird,’” Hilbourn said. “It had the American Flag on it, so I thought it was just going to be some goofy, patriotic thing.”

Hilbourn said that after seeing the stickers up close and scanning the QR code, which took him to the Patriot Front website, he decided to post it on his social media page.

“It really pissed me off,” Hilbourn said.

Hilbourn said what really bothered him was the underlying and manipulative messages on their website.

“They seem relatively harmless, but then when I looked at the group and saw what it was, that’s what really made me angry,” Hilborn said. “It was the underlying motivation for everything the group stands for.”

Hilbourn said that after he posted the picture on social media a friend of his reached out and sent him an article about similar stickers being found in the Myrtle Beach area.

Hilbourn said he posted the picture to keep students informed.

“I wanted people to be aware of what they were seeing,” Hilbourn said.

Tarbell said the entire campus police is dedicated to protecting all of the students on this campus.

“I love our students and we are here to keep our students safe,” Tarbell said. “I wish more students would have come to talk with us about it.”

Tarbell urges students to talk with campus police if they see anything that makes them feel uneasy or unsafe.