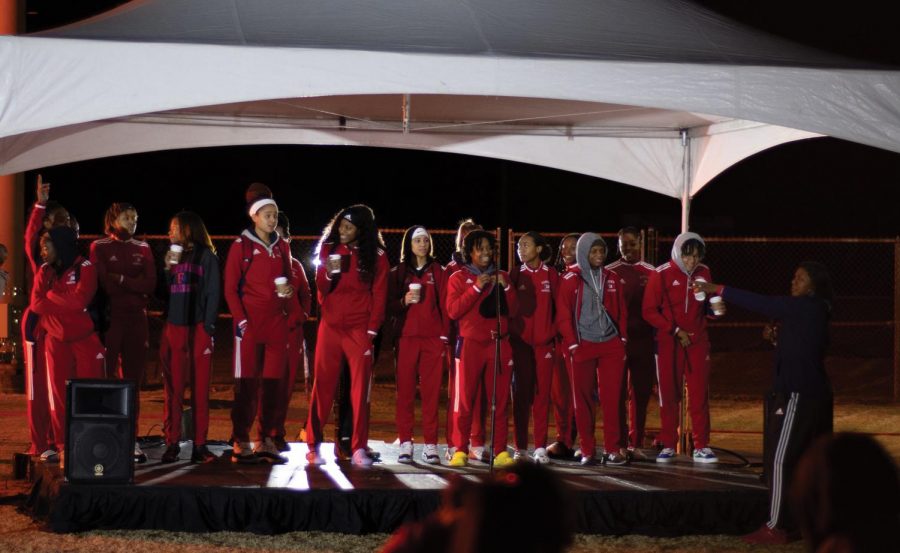 The FMU women's basketball team is presented to the crowd.

Students gathered around a warm fire at 6 p.m. on Jan. 30 to celebrate the last festivity before Homecoming at the soccer field behind the Smith University Center (UC).

Everyone enjoyed music, sipped on hot chocolate and ate nachos or popcorn.

SGA President Kendria Mason and Secretary Aaron Simmons, served refreshments to students as they came to the field.

“The bonfire is an awesome tradition hosted by SGA each year during homecoming,” Mason said.

During the bonfire, FMU’s Campus Activities Board introduced all of the candidates running for homecoming king and queen.

Each of the candidates were escorted onto the stage and their majors, interests and other interesting facts about them were read.

The head coaches of both the boys’ and girls’ basketball teams introduced each member of their team to the student body.

The basketball teams invited everyone to come out to their Homecoming games on Saturday.

“It’s a great way to get people excited for the game on Saturday,” Mason said.

Despite the weather, students were still able to have fun and listen to music while they waited for introductions and performances.

In between performances, there was a raffle where students could win prizes.

MaKayla O’Neal, a sophomore graphic design major, was excited to come out and catch up with friends.

“Even though it was cold, I had a lot of fun just being around my friends and getting a break from school,” O’Neal said.

Robinson said the bonfire was a great event for students to come together.

“It was an amazing feeling seeing the students come out and enjoy everything we’ve worked so hard to plan and execute,” Robinson said.