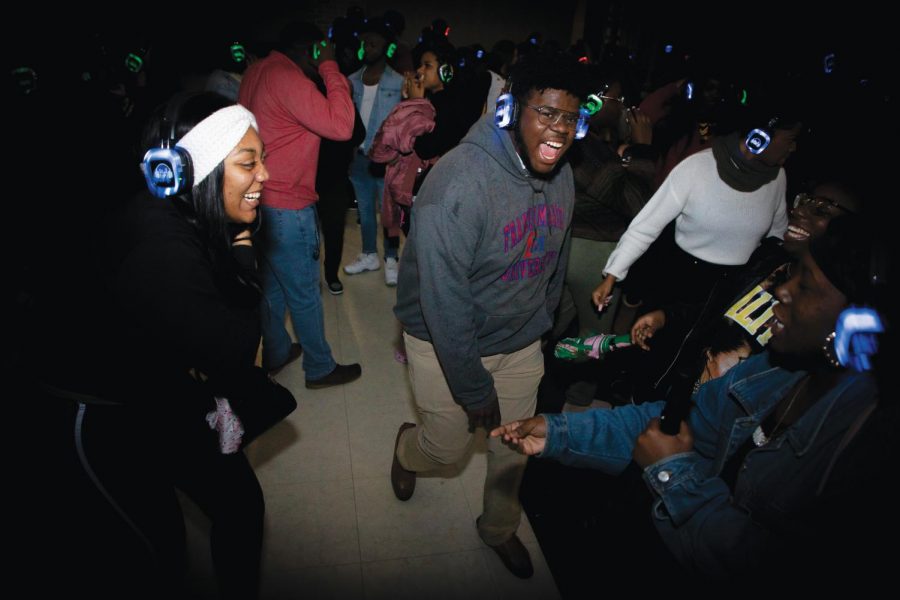 Students dance the night away during silent disco.

Students lined up in the UC before the party even started to wait for a chance to receive their headphones.

The Student Government Association (SGA) and Campus Activities Board (CAB) sat at the sign-in table collecting student IDs and trading them for their headphones.

The students were able to choose from 3 channels that were already on the headphones.

In order to enjoy the effects of the headphones, the lights were off so that everyone could see the headphones glowing and changing colors.

SGA Secretary Aaron Simmons said he had fun watching all of the students get along and sync up their songs.

“That was the best part of the night,” Simmons said. “When everyone changed the headphones to the same station and start singing ‘Love’ by Keisha Cole.”

Different sororities and fraternities strolled in sync with each other throughout the night.

In addition to the headphones, there were light refreshments for students to snack and sip on.

Briajah Henderson, a freshman biology major, had fun dancing at the party.

“This was one of the best events they have ever had on campus,” Henderson said.

Henderson said the silent party was really different, but a lot of fun.

“I really like how you could change the stations,” Henderson said. “All the stations played really good music.”

Henderson thought that the school did a good job getting students to come out to have a good time.

“I like the paint nights that we have at the Grille,” Henderson said. “But this topped all the other events we’ve had.”

Kristen Woodard, a junior mass communication major, attended the disco with her friends.

“I really liked the atmosphere when I walked in,” Woodard said. “I feel like it brought a lot of diversity to our campus because everyone came together to sing the same songs and dance to the same songs.”

While more than 400 students came out to the silent party, there was only 350 headphones, so some students were not able to participate.

Henderson said it would probably be better if the school held more events in the UC because it usually attracts a lot of students.

“I hope that the school does more of this stuff in the future,” Henderson said.

This was one of the events SGA planned to prepare students for the Homecoming festivities.