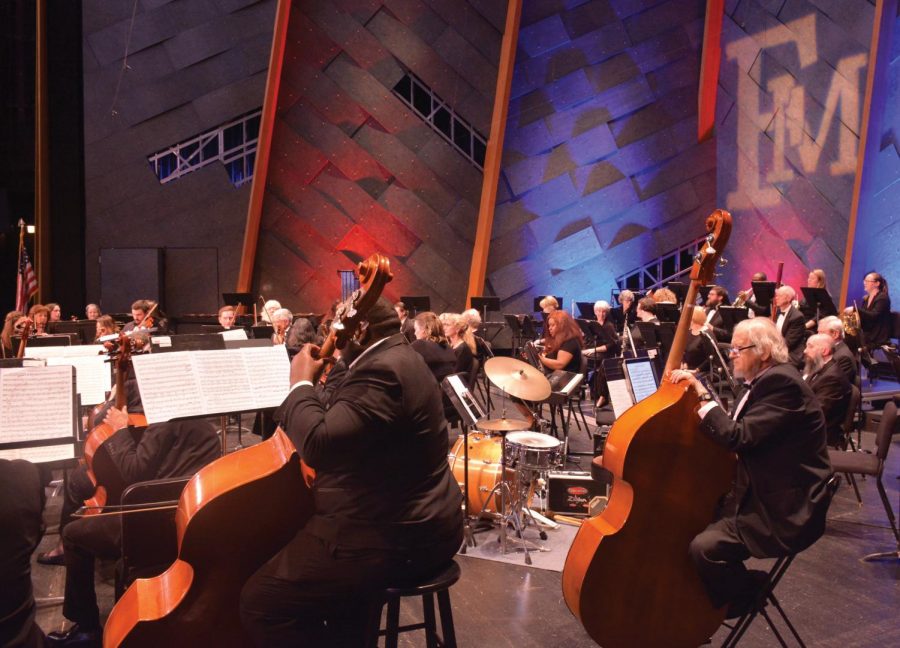 Several returning FMU alumni and current FMU students participated in a number of performances. The first performance was the Lincoln Portrait narrated by John Sweeney (FMU ‘19). Next was a series of performances titled “The Three Sopranos” with Bree Marsh (FMU ‘15) singing “Bring Him Home” from “Les Misérables,” Caroline Starling (FMU ’17) singing “The Beauty Is” from “The Light in the Piazza” and Arthenius Jackson (FMU ’09) singing “Never Enough” from “The Greatest Showman.”

Ashlei Jones, a junior music industry major, said it was great getting to meet FMU alumni and hear their advice.

“It was nice meeting them because they gave me some professional advice,” Jones said. “How they went about doing the things they are doing now.”

Dianna Wilson, a senior music industry major, thought it was encouraging to see FMU alumni who are successful in their field.

“It’s really difficult to get into the music industry,” Wilson said. “It’s really competitive. Seeing people that went to school here, seeing them be so successful, it’s really inspiring.”

Following “The Three Sopranos” was an ensemble where Marsh, Starling and Jackson were on the right side of the stage; and Jones, Wilson and Carlton Wise (FMU ’19) were on the left. The ensemble performed “My Shot” from “Hamilton.” The event finished with the Florence Symphony Orchestra performing Beethoven’s Symphony No. 7.

Starling said it was great being able to visit FMU and meet alumni, professors and current students.

“It’s always fun visiting old haunts, and also seeing what’s changed in the last few years,” Starling said. “I had never met Arthenius or Bree until the dress rehearsal, but they were absolutely lovely. I am grateful to still have great relationships with former professors from my program. It was so fun getting to connect with Ashlei and Dianna again and to get to perform with them. It makes my heart so happy to see current students on the same path I graduated from two years ago, who are hardworking and awesome.”

Both Wilson and Jones agreed that FMU has a great music program, despite its size, that does everything it can to teach students and prepare them for the music industry.

“Being at a smaller school has helped me stay grounded, instead of being overwhelmed with the pressure, the competition and the commitment of being in the music field,” Jones said. “It’s really nice to have one-on-one time with our teachers.”

Wilson has been encouraged by professors in the music department bringing in professionals to talk about their experiences and prepare students.

“We have the opportunities to connect with other people,” Wilson said. “Our professors bring in musicians and singers, and all these people that take the time to sit and talk about future plans or goals and what it’s like in the music industry and the business side.”

Starling, Wilson and Jones all thought the performances went very well, and were thankful for the opportunity to perform at FMU.

“It was absolutely surreal and such a pleasure to sing a piece I love so much with a live orchestra,” Starling said. “It’s a collaboration on such a massive scale, and everyone was so incredible to work with.”

“FMU Celebrates 50 Years with Florence Symphony Orchestra” had a tremendous turnout, with students, faculty and the Florence community coming together in celebration of  FMU’s 50th anniversary.

At the end of the performances, students, alumni and faculty mingled together at a reception in the lobby of the PAC.