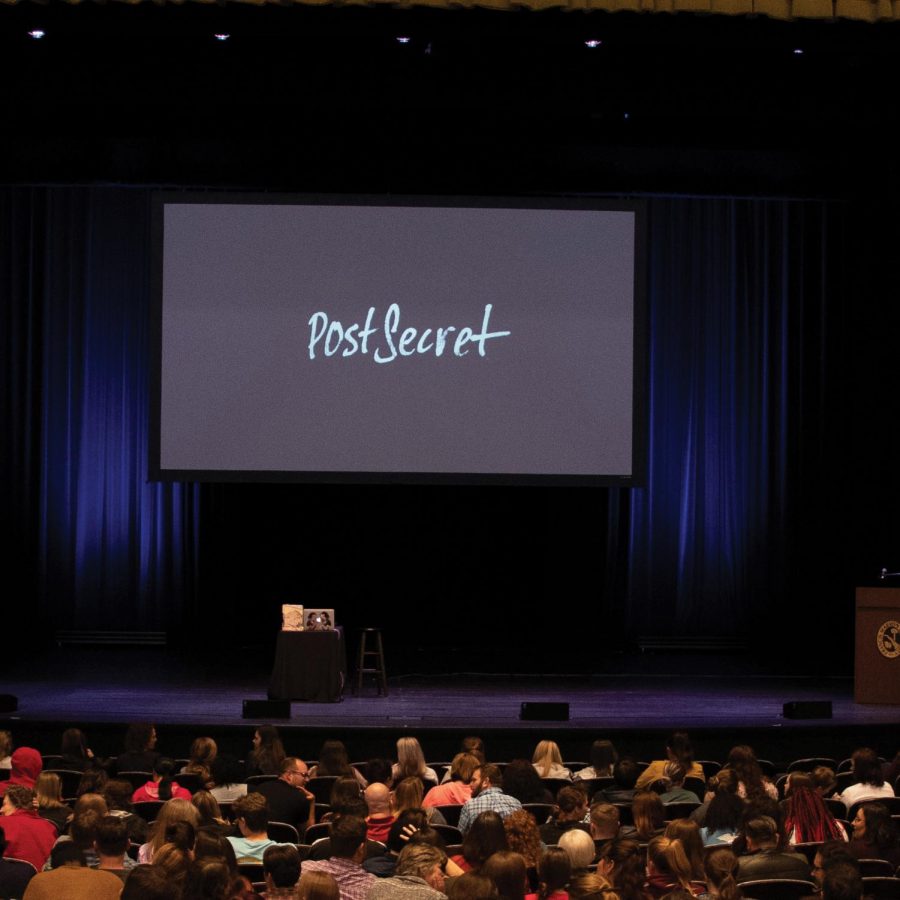 Students, faculty and the community gather to hear Frank Warren speak at the PostSecret event.

For over 10 years, people from all over the world have anonymously written down their deepest, darkest secrets on postcards and mailed them to Warren’s home.

PostSecret has become a worldwide phenomenon. It’s one of the most popular ad-free sites with more than 800 million views to date. It has resulted in five bestselling books and several exhibitions.

Warren talked about the kind of postcards he gets, mostly regarding mental health. A lot of the secrets are things someone once did at a point in their life, or how they are in love with someone they wish they could tell.

Rose Abuaita, a senior human resources and marketing major, was pleased with the show.

“I think Warren talking about the postcards was beneficial because it reminded everyone in the room that they aren’t alone in whatever they’re going through,” Abuaita said.

Warren also shared some of his secrets. He got a secret one day with a picture of a broken bedroom door from someone who had been abused by a parent. It reminded him how, when he was young, he had one of those doors too.

“For the first time, I really felt it,” Warren said. “There are two kinds of secrets; there are the secrets we keep from others, and the secrets we hide from ourselves. When I uncovered that part of my personal history, I put it on a postcard and mailed it to myself, and talked to my wife about it. Every time I share my story, my burden gets a little lighter too.”

Warren now takes his secrets on the road, mostly to college campuses, and talks about the power of releasing a secret, and then challenges students to try it.

Toward the end of the event, Warren let other students share their secrets. Many students and members of the community got up and shared a secret they haven’t told anyone.

Antonio Waiters, a senior economics major, shared his secret about losing his mother.

“I shared my secret because I had been holding it in since that morning after she passed,” Waiters said. “I have friends, close friends and, of course, family but I couldn’t allow myself to disclose that information because I didn’t feel comfortable.”

Waiters also talked about how liberating it was to share his secret.

“It was the people that went up prior that gave me confidence,” Waiters said. “Driving back to campus that night, I felt as if a weight had been lifted off my shoulders but I still had tears in my eyes.”

Any FMU students who want to share their secrets can write them on a postcard and send them to PostSecret at 28241 Crown Valley Pkwy #F224 Laguna Niguel, CA 92677-4442 or read postcards sent to Warren at www.postsecret.com.