CAB hosts first event of the semester at UC 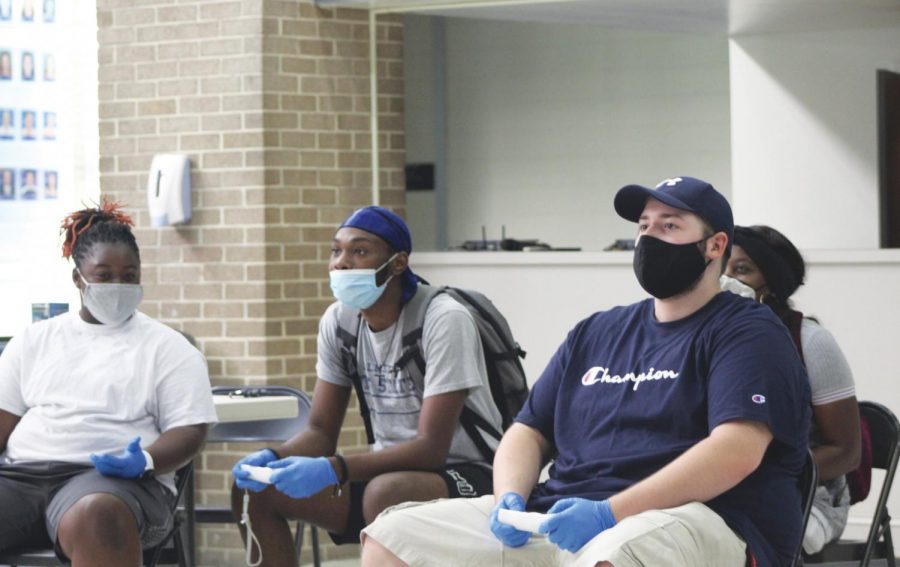 Students play on the Wii during the game night event.

Bored from the lack of things to do on campus, students filled the University Smith Center for FMU’s first event of the semester from 4-7 p.m. on Thursday afternoon, Aug. 27.

“With everything going on with coronavirus, it is hard to make sure everyone is socially distanced, but we wanted to make sure we had a good start event for our students,” said FMU’s Campus Activities Board (CAB) executive chair Caira Wilson.

CAB put out many different games for students to enjoy. They played Just Dance games on the Wii, card games, board games and even corn whole.

The event lasted for three hours and students filled each game station the entire time, while making sure to stay socially distanced and safe.

When students came to the sign-up table, they had to have their mask on and put on blue latex gloves before going in.

Many of the students had low expectations for the event because of the pandemic, but said they were surprised that the event was actually fun.

Sophomore biology major Amiyah Welder and her friend thought the event had a good turnout.

“I didn’t think it would be fun at first,” Welder said. “But considering the circumstances it was actually kind of fun.”

While people were making sure to socially distance, they were still able to get out and meet new people or just enjoy time with their friends.

Some students even got the chance to learn new games and remember how to play games they hadn’t played in a while.

Freshman Janira Miller said she had forgotten how to play monopoly but was able to remember once she started playing it at the game night.

Most of the students who showed up were expecting the game day to be very empty and boring, but the event was the exact opposite.

“I thought it was going to be slow and nobody was going to show up, until I got here and everybody was moving around playing games and stuff,” freshman Jonathan Keller said.

Students wore the mask and gloves because they wanted to be safe, but most of them said the gloves and mask were very inconvenient.

“The worst thing was the gloves,” freshman Herbert Williams said. “Even though I get it, it was just really hard to pick things up.”