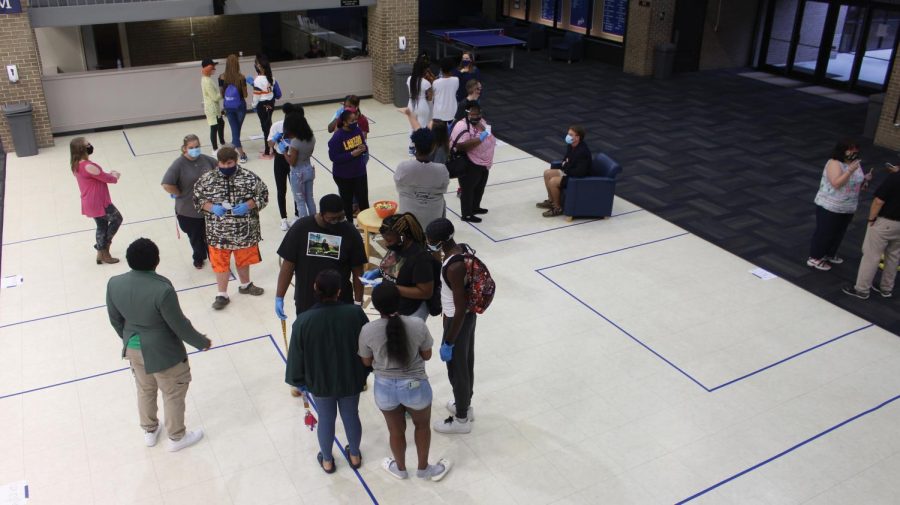 Students try to solve the “Murder Mystery” by talking to suspects in the UC Commons.

The Campus Activities Board (CAB) hosted a “Murder Mystery” event from 5-7 p.m. on Oct. 7 at the Smith University Center (UC) Commons as a part of its  “UC After Dark” series.

Loosely based on the board game Clue, CAB members split students into six groups in a race to solve the murder case. Students took turns speaking to each of the costumed suspects to gain clues on the identity of the guilty party. The first team to find the murderer was awarded bragging rights as well as a trip to the large candy bowl in the center of the room.

Student life specialist Alex McGill said CAB hosted a murder mystery event in the past, but due to time constraints, it ended earlier than planned. Though the first event was cut short, McGill said it gained a positive response and encouraged them to organize another.

“The feedback we received was that students really enjoyed the event, and we wanted to do something again,” McGill said. “Due to COVID, we had to be creative as far as touching stuff, so this is where this idea came from.”

McGill said CAB took many precautions when organizing this event. Students were offered medical gloves in addition to their masks, as well as pens and paper, which they could use to take notes. McGill said they were encouraged to keep the items afterward to avoid as much contact as possible.

With everyone adhering to the guidelines, McGill said the students were still able to have a fun and safe experience.

“Everybody has been really respectful and have been really safe,” McGill said. “Students mostly just want to have a good time.”

McGill said she enjoyed seeing how the students interacted with the story.

“I love to see how the wheels in the players’ minds turn,” McGill said. “The students get so invested and passionate about it. The CAB members really get into character, and so do the students.”

This rang true for Brittany Clark, a junior business administration major and a new member of CAB, who acted as a suspect in the game. She said she decided to work at the event because she loves mysteries. Clark was not the only one who enjoyed this aspect of the event, as she noticed the students soon became engaged with solving the puzzle.

“I believe the event went really well,” Clark said. “Everyone who was there seemed to be enjoying themselves and really trying to solve the mysteries.”

Clark said it is helpful for students to have events where they can meet new people and decompress from daily life.

“I think it’s important to host events like this so students can interact with each other more often and get to know each other, the campus and its organizations,” Clark said. “Getting the student body involved in events also gets them away from their stressful schoolwork so they can enjoy themselves.”

Kayra Rice, a freshman pre-nursing major, said she appreciated being able to meet and talk to people while working at the sign-in desk.

“I decided to come to the event to get to know CAB members better, meet new people, and because the event sounded very interesting,” Rice said. “I enjoyed getting candy and attempting to solve a mystery while signing in all the people who came to the event.”