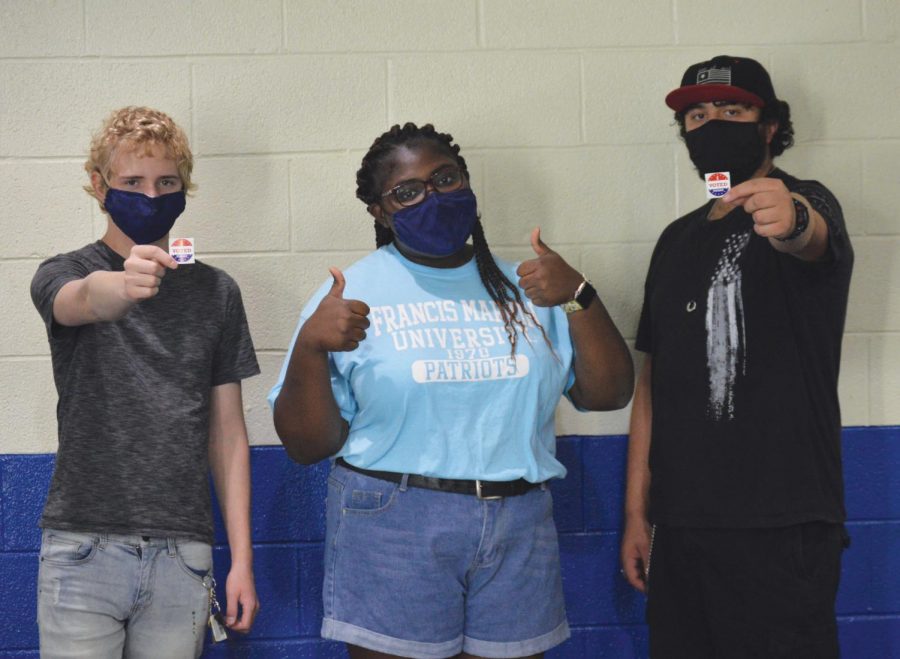 Students organizations, fraternities, sororities, faculty and staff all teamed up to get students registered to vote.

The initiative to get students registered began at the beginning of the fall semester.

Tymoshio Robinson, SGA president and senior political science major, began the effort in the start of the semester to get as many students voting as they could.

In an email to the student body the day before Election Day, Robinson reminded students that voting was their right as well as their responsibility.

“The right to vote is a right that should be valued, cherished and exercised each time we are given the opportunity,” Robinson said.

Robinson said this election in particular was like no other since it would be one of the most monumental elections in history. He said they wanted to keep up the tradition of having the most students vote in the nation.

“Students at Francis Marion University, statistically, vote in larger numbers than students that attend any other institution of higher learning in the state of South Carolina and across the nation,” Robinson said.

Robinson added a resolution to the SGA Constitution requiring all the senators to be registered to vote and to vote.

To keep the statistics high, Robinson partnered with the Alpha Kappa Alpha Sorority Inc. (AKA) to adopt a class within the student body.

As an organization known for hosting an array of events and being heavily involved with organizing events for the student body, Naetosha Young, AKA president said she knew they could help get people to vote.

The AKA’s hosted a voting competition among the three organizations. Each organization had to adopt classes of students and get as many of them to vote as possible.

“Since all of our events have to be online, we figured that making it a competition would really get people involved,” Young said.

On behalf of SGA, Robinson adopted the freshman class and began campaigning to get them to vote.

The AKA’s also hosted a town hall event that allowed students to talk with and question local candidates running for various offices in Florence area.

Larryon George, SGA Treasurer, senior accounting major and a member of the Alpha Phi Alpha Fraternity Inc., said the Alphas have many initiatives, but getting people to vote was a major goal.

“A voteless people is a hopeless people,” George said. “With this initiative we educate people on voting, their rights on voting, how to register to vote and we register them to vote.”

George said the Alphas host a voter registration drive through every year at FMU.

George also said he was happy with how many students came out and showed an interest in voting.

“We were very pleased with the outcome and proud of our students for not only registering but actually going and using their voices by casting their ballot,” George said.

SGA offered numerous opportunities for students to get registered at various events.

The student chapter of the NAACP on campus was also heavily involved with urging people to vote.

NAACP participated in local voting drives, volunteered at voter registration events and worked on Election Day to assist people with the voting process.

FMU’s involvement in promoting voter registration and assisting students in the process created relationships among the different on-campus and local organizations in the area.