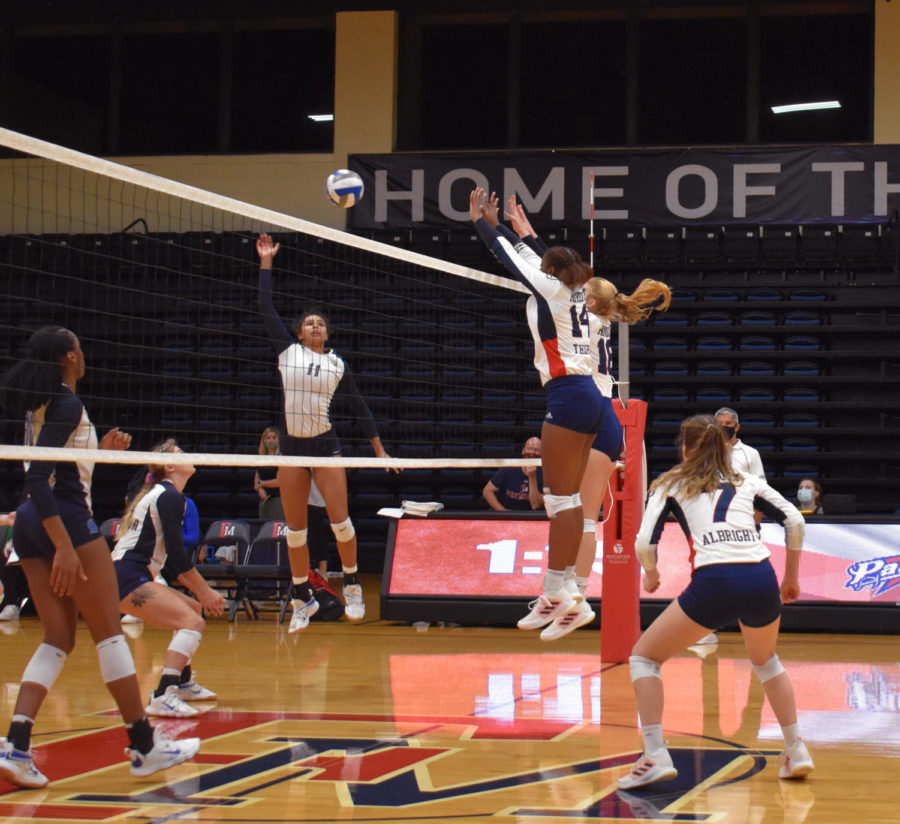 The Patriots look to block the attack from the Argonauts.

In their first home weekend of the season, the Lady Patriots faced defeat after three hard-fought sets against the nationally ranked University of West Florida Argonauts at 7 p.m. on Friday, Sept. 17, in the Smith University Center (UC) gym.

The Argonauts are ranked 19th in NCAA Division II women’s volleyball. The team from Pensacola, Florida came to Florence ready to battle.

The Argonauts defeated the Patriots 25-15, 25-21 and 25-14. The second set was a close one with multiple lead changes and ties. The Argonauts claimed the final five points, granting them a win for the set.

The Patriots spent the week before the tournament preparing for West Florida.

“We had very intense practices where we worked on being loose and confident in pressure situations,” said senior middle blocker, Iyanla Thigpen. “We worked on blocking a lot in practice, so it felt great to see and feel everything transfer over.”

Thigpen was a key player for defense during the weekend, especially in their match against the Argonauts. Tallying two blocks for the Patriots, Thigpen successfully shut down some key offensive plays. Other offensive leaders were junior pin Gracie Davis, with 16 kills, and graduate student opposite Kayla Arthur, with 12 kills and two blocks.

Another crucial player during the match was a graduate student setter, Naina Ivanova, who tallied 27 assists. Ivanova was particularly excited to play the Argonauts because she is familiar with the pressure of playing nationally-ranked teams.

“Playing at a Division I level for four years, I am very familiar with the system that they play, and I enjoy playing teams like West Florida,” Ivanova said.

Though the Patriots lost, there was a distinct feeling of optimism from the players looking into the rest of the season.

“We are very optimistic,” Thigpen said. “We saw how much we grew together and how well we are progressing in the gym. We are such a talented team, and we have not even reached our highest level of playing yet.”

Ivanova believes they could have brought a better game to play the Argonauts, but she also can see the team’s potential to have a promising season.

“We are learning every day and getting better and better,” Ivanova said. “I think this season will be a great one for us.”

The lady Patriots also enjoyed their first home weekend of the season. After many weekends away, the UC gym welcomed spectators from friends, family and other sports enthusiasts.

“It was fun,” Thigpen said. “It felt great having the support from our families, friends and other sports teams. It made the games way more exciting and fun.”

The Patriots will continue their season away at Erskine College and Emmanuel College, but their next home game will be at 6 p.m. on Friday, Oct. 8, against the Converse University Valkyries in the UC gym.