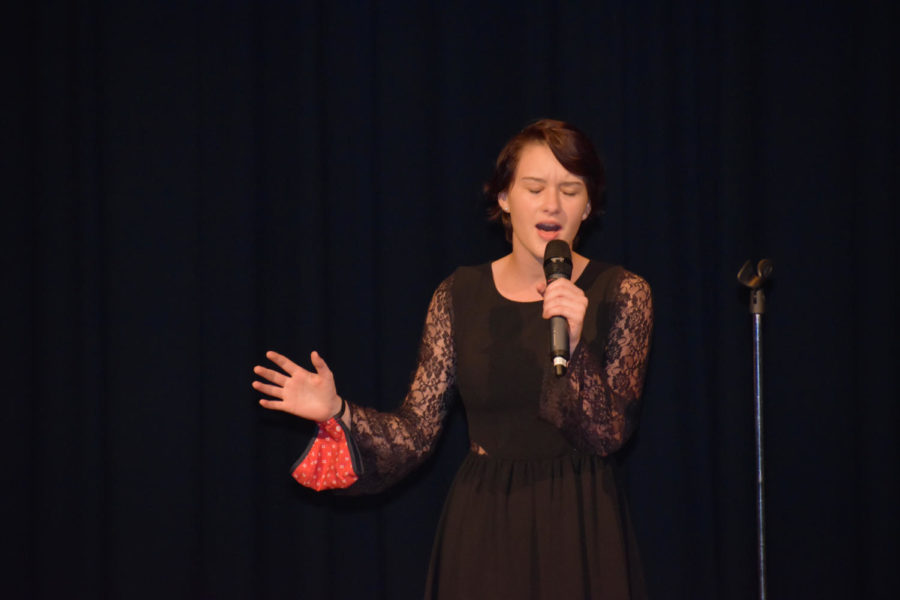 A contestant performs for the Student Life judges, aiming to move on to the next round.

The first round of the annual FMU’s Got Talent showcase was held from 6-8 p.m. on Thursday, Sept. 30, in the Chapman Auditorium.

“I loved how they had the music we could jam out to during the breaks, so we didn’t get bored, and the MCs were amazing,” Meisha Coles, mathematics major, said.

The night totaled nine acts, with The Royalettes dance team performing during the intermission and a performance from Campus Community Liaison, Malcolm “MJ” Armstrong, at the end of the show. The acts included singing and spoken poetry along with some guitar works from contestant Cody Walker.

“We were shocked when they said they selected two golden buzzer winners,” Campus Activities Board (CAB) member Adrien McClintock said. “We were expecting only one.”

The golden buzzer winners were Jahylin Baxter, who sang “I’d Rather Go Blind,” by Etta James, and Cheyanne Stevenson, who sang “She Used to be Mine,” by Sara Bareilles.

“This was my favorite one so far, and it was because our new CAB team is really getting out there, getting the crowd entertained and really giving us a great show,” Coles said.

During the intermission and after The Royalettes performed, CAB member, Reese Bacote, walked through the crowd, allowing people to sing some song selections. Some students sang, some danced, and some recorded themselves in action.

Some of the FMU’s Got Talent contestants sang emotional pieces that reminded them of their past. One of these performers was Trinity Stevenson, who sang “Arcade,” by Duncan Lawrence because it reminded her of an event last year and how traumatizing it was. Now, she looks back on it and laughs.

The talent show was composed of students whose vocal ranges could go from high pitch, to alto, and even to a bass pitch. Matthews told one of the performers his vocal range was “sick.”

Students engaged with the contestants’ performances, offering standing ovations, cheering, singing along and clapping to the beat of songs.

“I am excited about the next showcase,” Coles said. “The music hit to the core, and they sang with so much passion and emotion, plus they looked absolutely amazing.”

Contestant Samaya Pinckney performed an original poem called “Emotionally Unavailable.” Her piece told everyone that she finally learned how to become selfish with the best parts of herself.