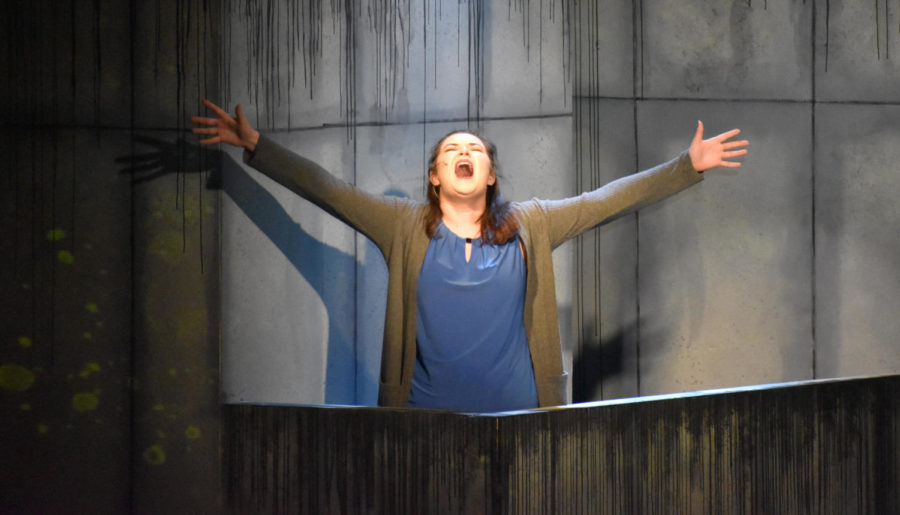 The FMU fine arts department performed “Songs for a New World” from 7:30 – 9:30 p.m. on the nights of Oct. 21, 22 and 23, in the Hyman Fine Arts Center Theatre. Directed by Glen Gourley, fine arts department faculty chair and professor of theater arts, the show consisted of several pieces from the original 1995 production at the WPA Theatre in New York City.

The show started with a dimming of the lights, an announcement to turn off all electronic devices and a silent entrance by the band followed by the cast. The audience applauded throughout the night after each performance, especially during the intermission, when some attendees began reciting the most recent number. At the show’s conclusion, the cast took a bow for the crowd before walking with the band off stage.

“We were looking for something we could do with a small cast and a small group of musicians,” professor Terry Roberts, coordinator of the music program and conductor for the show, said. “We came up with this one because we knew the composer, and he gears a lot of his work toward small groups like this.”

The show starred Ashlei Jones as Woman 1, DeQuan LaShane as Man 1, Abigail Floyd as Woman 2 and Griffin Thompson as Man 2. The band ensemble consisted of Cathryn Ackerman, Cliff Gardner and Simon Mendoza, featuring HyunJung Im on the keyboard, Roberts on the bass, music instructor Shane Reeves on percussion and musician Randy Oswalt on the drums.

With seven cast members and four band members, establishing a full performance proved to be a challenging task for the group, not the least of which involved a delay in the production due to COVID-19. Roberts said this led to the need for recasting, as some of the original students slated for production graduated before they had the chance to perform.

“For us practicing, we started mid-September,” Abigail Floyd, a junior healthcare administration major, said. “We had about six weeks of practice. We kind of made the show snappy.”

Though the production had a relatively fast turnaround time, the group pulled the seams together on the show and delivered the performance three nights in a row.

“I did a lot of high school theatre and middle school theatre, and it’s always been my passion, so I’ve always had this animated feel to me,” Floyd said. “When I get on stage, it’s just the adrenaline from the lights, and I know people are looking, and it just brings out the character. I kind of immerse myself into the song… Now that it’s done, I’m super proud… I’ve made friends I’m going to keep for the rest of my life.”

Griffin Thompson, a senior music industry major, said he appreciated the creative freedom the actors held for their characters.

“Typically, when I do shows, there’s dialogue and choreography,” Thompson said, “but the choreography here was more or less up to us, so it made us dive into the characters in each song, and we had to bring out the character based on what we thought they would do.”

Despite delay complications from the pandemic, including a nearly complete recast, the production persisted. As some might say, “The show must go on.”