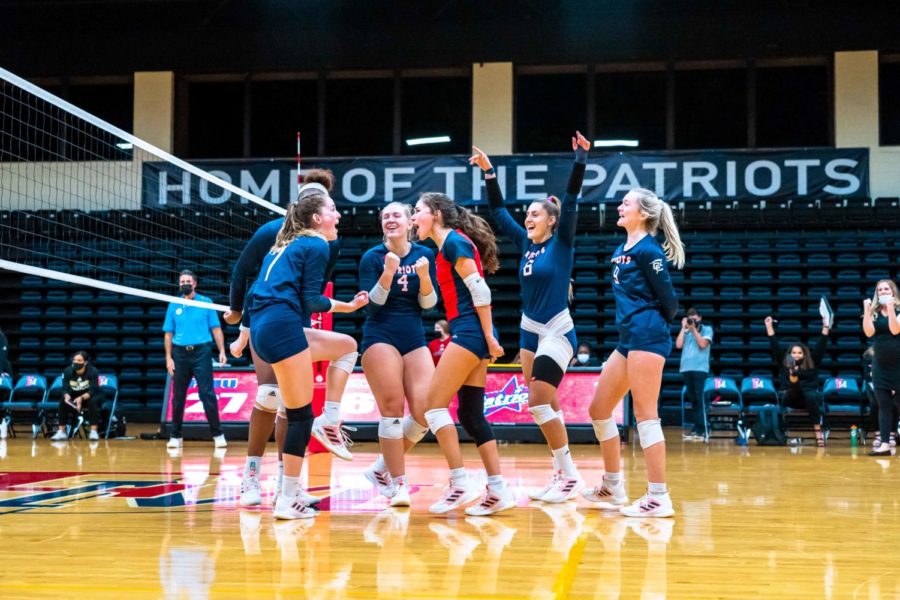 The Lady Patriots celebrate a point against UNCP.

Despite some mid-match challenges with second and third-set defeats, the Lady Patriots prevailed passed the University of North Carolina at Pembroke (UNCP) Braves with a 3-2 final set score, making their record 9-0 for the volleyball season.

After both schools transferred to the Conference Carolinas this year, this was a defining match for both programs. As always with the battle of I-95, the competition was intense, and the Patriots spent the week preparing for the match.

“In the days leading up to the match and during the match, our team decided to have a mindset focused on us,” Kaylee Gillespie, sophomore setter and double major in business and biology, said. “Pembroke has many talented players that are the leaders in statistics for the conference, and we specifically studied them in film to know their tendencies and weaknesses. Keeping in mind that the match would be one of our toughest conference match-ups all year, I think collectively we knew we would need to be aggressive, strategic and consistent.”

During the match, the Patriots seemed to lose a bit of their game plan in the second and third set. Gillespie claims Lauren Baufield-Edwards, head women’s volleyball coach, had to remind them of their overall goal.

A few key players from the Patriots were senior psychology major and middle blocker, Lily Walton, with 13 kills and 10 blocks, and Gillespie with 42 assists and 24 digs. With both Walton and Gillespie leading the offense and defense, the Patriots could bounce back after the third set and take home the victory.

“The match was a battle from start to finish,” Gillespie said. “At the end of the fifth set, when the final point was scored, it felt amazing.”

“At the end of the set, my teammates and I met together and agreed that we would play the next set for each other, and that it was time for us to mentally decide that we were taking this set,” Gillespie said.

With multiple players achieving double-doubles and finding success in key moments, it seemed the Patriots decided to play for each other.

With nine consecutive wins under their belt for the season, the Patriots look to continue improving and maintain their winning streak.

“As a team, we continue to look at one game at a time,” Gillespie said. “Pembroke definitely gave us momentum and confidence for the matches to come, but also confirmed the fact that our road to a championship title will be tough. We’ve seen what we can do when we use our game plan to attack the opponent and continue to work on certain skills that we need to improve.”

“We haven’t hit our potential yet, which is exciting because we have a lot of season left in front of us to work towards that,” Gillespie said. “We have a really special team, so if we can become more consistent in all aspects of the game, I think we will continue to do great things.”

Fans can find the Lady Patriots next on the home court playing Lees-Mcrae College at 6 p.m. on Friday, Nov. 5 at the Smith University Center (UC) gym.