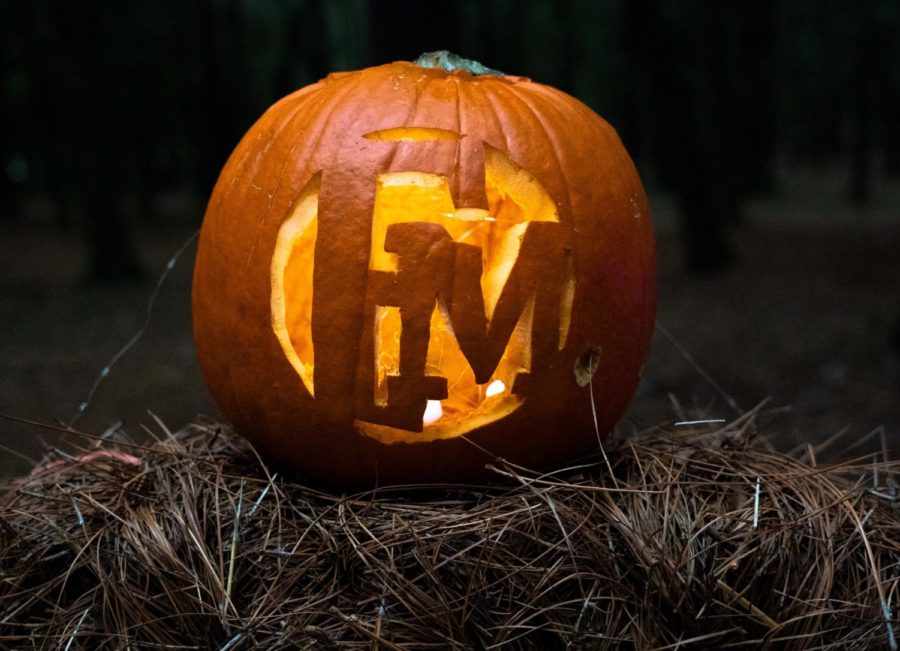 Spanning from Heyward Community Center to the Smith University Center (UC), the contest event surrounded pumpkin displays arranged along a pathway. The drive-thru began at dusk, featuring creations from over 30 different organizations, though crowd goers were also free to walk the path alongside the pumpkins. The night was centered around creativity and artistic ability, as teams carved and painted their pumpkins to represent their personalities and organization themes.

Though FM A’Glow is on its fourth year as an annual tradition, this was the first time the event featured the ability to drive through the path laden with the displays.

The UC Lawn provided parked food trucks for guests, along with an area for children to carve their own pumpkins.

The event also featured a “Pumpkin Chuckin’” competition, in which groups designed trebuchets to launch their orange cargo the furthest distance. This year, the American Society of Mechanical Engineers won the contest.

Along the path, some organizations took the display a step further by dressing up alongside their pumpkin arrangements. The displays contained themes varying from traditional Halloween topics to more playful topics such as Mario Kart, McDonald’s and yellow minions.

“I think the path is more ‘lit’ than it was last year,” Ioffreda said. “Also, the lights are really fun this year. I like that everyone did different themes compared to last year where everyone had similar themes.”

“My favorite part of the path was definitely the Green Club setup, it looks amazing and is my absolute favorite because they did ‘Mario Kart’,” said mathematics major Taylor Boatwright.

The most creative organization was the FMU Green Club whose theme was “Mario Kart.” The king and queen of pulp was the university communications department. Another one of the scariest displays was the Patriot Players with their theme as slashers. And lastly, the Judges Award went to the Swim Club, whose theme was a circus.

“I liked how there weren’t only people driving but also children walking,” said accounting major Felicity Lucas, “The children walking in their costumes reminded me of home whenever kids would walk up to my door and say ‘trick-or-treat’ asking for candy. I’m glad that children were still able to have fun for Halloween with the coronavirus disease still around.”