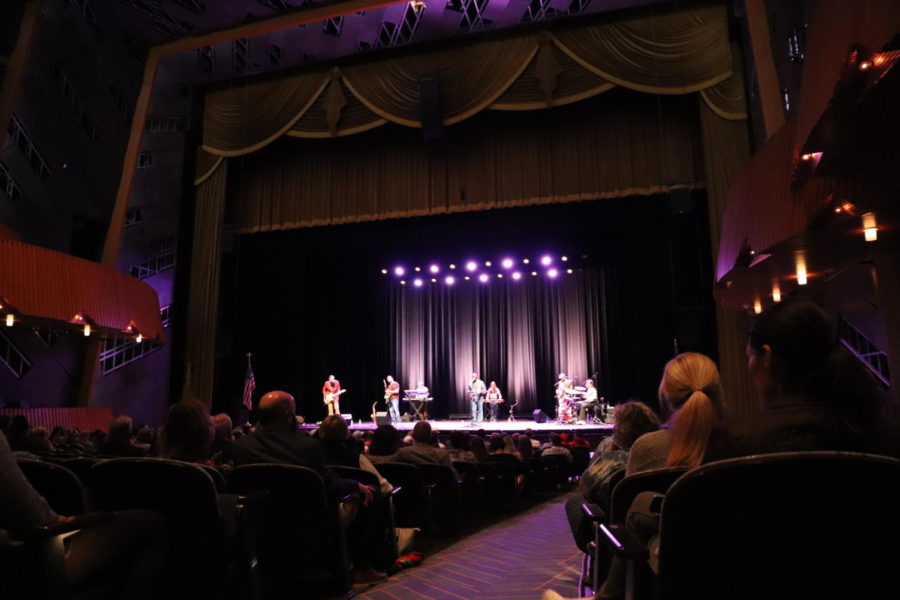 To celebrate the founders of FMU, the Performing Arts Center (PAC) hosted a musical celebration from 7:00 p.m. to roughly 8:45 p.m. on Thursday, Nov. 11, at the PAC in downtown Florence.

The celebration referred to as “Doug’s Day,” consisted of a few musical talents and food trucks before the main event, which was the performance of Atlanta-based band, Yacht Rock Schooner, inside the main auditorium. Reportedly, around 400 people attended this event.

The band performed covers of numerous songs from the ‘70s and ‘80s. With flashing lights above the musicians, each song performed was met with immense energy from the crowd, as people cheered, clapped and some even sang along to the hits they covered. Just a few of the songs they performed included Redbone’s “Come and Get Your Love” and Toto’s “Africa.” After everyone thought the performance was over, the band reemerged to perform the Gerry Rafferty hit, “Baker Street,” to the remaining audience members.

“Today is Doug’s Day; that is in honor of our first president, Dr. Doug Smith, and our founding faculty and staff,” said Lauren Stanton, vice-president of institutional advancement at FMU and main organizer of this event. “We are celebrating today as a founding day for the university – specifically for the president and the founding faculty and staff who established the university in 1970.”

After taking a year off due to the COVID-19 pandemic, Stanton said she was relieved to be able to bring people together again to celebrate the establishment of the university.

“The first time we did this event was during our 50th year celebration (2019),” Stanton said. “Unfortunately, we could not have it last year due to COVID, but we’re really happy to bring everyone together again. In 2019, we had Edwin McCain, and several hundred attended his event.”

Stanton also said one of the goals of FMU’s institutional advancement was to reach out to more than just the current base of students.

“We wanted to bring this to the PAC so we would be able to draw in the students and the community,” Stanton said. “For our current students, we made sure that there were advertisements, posters, emails, televisions on campus and student organizations who were pushing the message. As far as everyone else – our community members, faculty, staff and alumni – we also sent them emails, social media and newspapers; there were several outlets that anyone could have found a way to attend the event tonight.”

“Doug’s Day” was a big event for the PAC, but by no means was it the last. The FMU PAC has a jam-packed schedule for the upcoming year, and they look forward to providing entertainment to FMU students and the Florence community.

“We have a couple of symphony concerts that are coming up,” Bud Simmons, director of the FMU PAC, said. “The Nutcracker, that dance company, is going to be here in December – all local artists.”

In addition to the upcoming Christmas show, the PAC will host a bluegrass concert with Bush, Marshall, Myer and Myer on Jan. 21, 2022; the Polish Wieniawski Philharmonic Orchestra on Jan. 27, 2022 and the Atlanta Rhythm section on March 26th, 2022.

“We have a lot of student activities that go throughout the year, too, with the FMU fine arts series,” said Simmons. “[There are] some activities with Christmas programs coming up with that pretty soon.”

For more information on upcoming dates and performances, Simmons encourages everyone to go to the PAC’s website at fmupac.org or call the ticket office at (843) 661-4444.