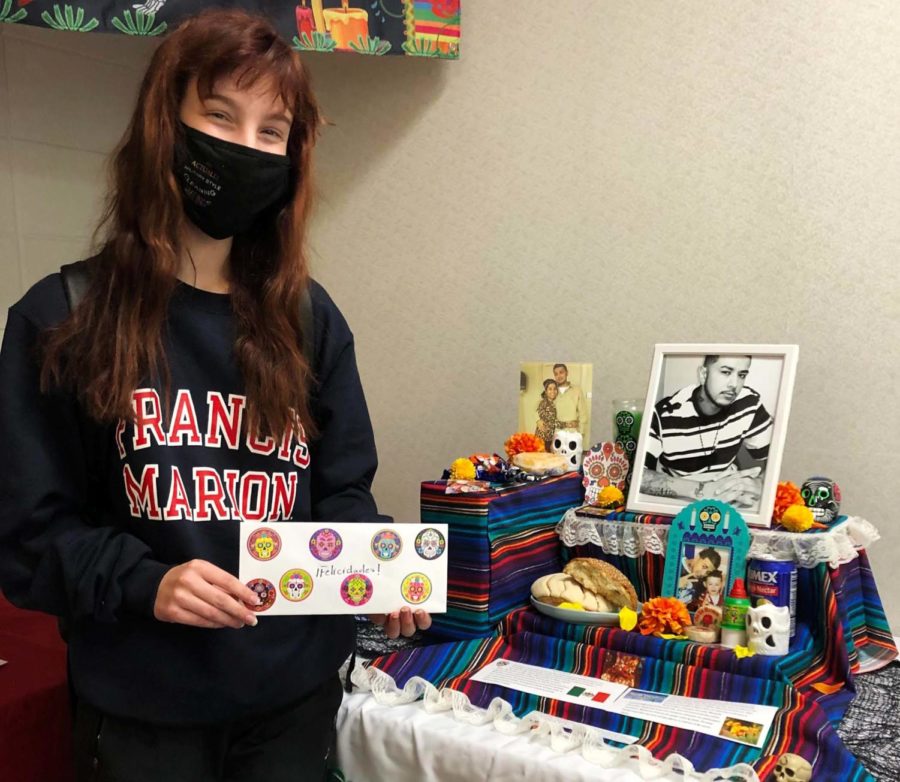 Junior mass communication major, Melanie Dozier, poses with the prize for her altar during the Dia de los Muertos celebration.

“Interestingly enough, it [Dia de los Muertos] has become quite popular here in the United States, particularly in border states where there is a large Mexican population,” said Wendy Caldwell, professor of Spanish. “I like to think that it gives a more positive spin on death, which makes it a healthier way to grieve the loss of these loved ones and celebrate their lives.”

To participate in the contest, students created altars to honor those close to them who passed. They also submitted a short description of the person to whom the altar was dedicated or explain the meaning of the holiday itself.

In total, there were 11 entries, with each numbered so students could remain unbiased when voting for their favorite. At the end of the competition, junior mass communication major Melanie Dozier was named the winner.

“My altar was for my girlfriend’s cousin Ivan Ramirez, who was killed because he got involved with the cartels in Mexico,” Dozier said. “When I won, I was honestly surprised. Each altar had someone that the author felt close to. I didn’t think I’d win since Ivan and I weren’t close; I did the altar for my girlfriend and her aunt, not for myself.”

Dia de los Muertos, or Day of the Dead, is mostly celebrated in Mexico, where it is believed that those who have passed can come back to visit their loved ones, and creating an altar helps the spirit find their way home.

Typically, altars consist of photos of a family’s deceased loved one along with items they enjoyed, such as their favorite candy or food. They also contain incense to cleanse the air around the altar so spirits can come through freely, marigolds to decorate the altar and add more color, pan de Muertos (bread) and Calaveras (sugar skulls).

To ensure that her altar was done well, Dozier did a good bit of research before beginning. She said after looking at several other examples of altars, she decided the most important thing was to represent the honored person as a whole. She said she wanted to make sure her altar was colorful, detailed and full of food because those things represented Ramirez well.

“I think my altar stood out because of all the time I put into it, and I included Ivan’s story in English and Spanish for the readers,” Dozier said. “I wanted whoever was looking at my altar to feel the impact of Ivan’s life beyond the cartel. I wanted it to be understood that he made a mistake, but that it doesn’t damage his family’s view of him because he never treated anyone around him badly.”

Each year, the winner receives a cash prize, and their altar is left on display for a short period after the other entries have been picked up so students can admire it as they pass. The Dia de los Muertos altar competition occurs annually, giving FMU students a peek into Mexican culture and hopefully sparking an interest in Spanish.