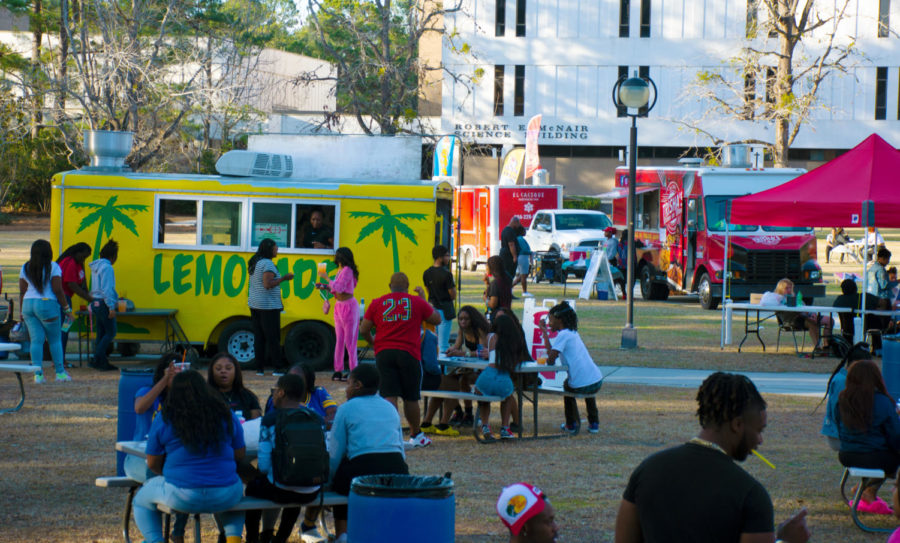 As part of the school-wide tradition, the university offered five main events, one of which was dubbed the “Block Party,” which took place from 3 to 5 p.m., Feb. 18, on the Smith University Center (UC) Lawn. Seven food trucks lined the grass in addition to activities such as mini-golf and corn-hole competitions.

Isaiah Carroway, a sophomore computer science student at FMU, also played the saxophone live for students as they gathered on the lawn.

Kandahar Smyer, a junior nursing major, said the event was a nice change of pace for satisfying midday food needs.

“I was hungry, and I knew they were having a Homecoming event today, so I invited some friends to come,” Smyer said.

“I love food, and I knew they had food trucks,” Coles said. “[FMU] always has good ones, so I knew they wouldn’t mess up for Homecoming.”

In addition to the Block Party, FMU hosted Round Two of the President’s Bowl on Feb. 15, two basketball doubleheaders on Feb. 16 and 19 and the Patriot Bonfire on Feb. 17.

The basketball games on Saturday, Feb. 19, concluded with two last-minute victories over Emmanuel College. After close games, the women finished 63-62, and the men finished 80-78 in overtime.