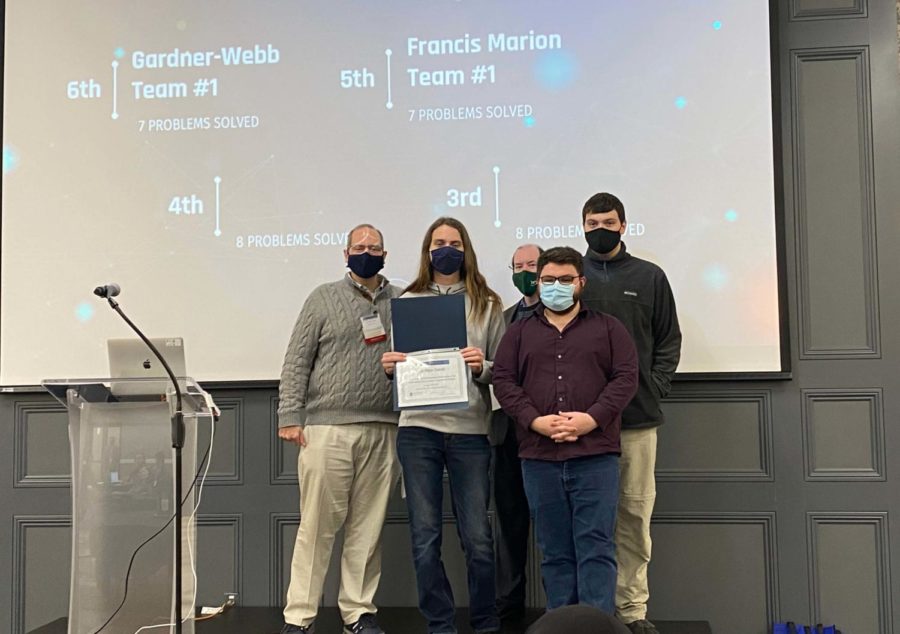 “I would say I was pleased that our team was able to place 5th with this being our team’s first in-person competition,” said Austin Freeman, CS and Mathematics double major and member of the fifth-place team.

According to the CCSC website, the annual competition takes place in various regions around the United States. Though the Southeastern region usually holds its competition in November, it was postponed until January of 2022 to allow for an in-person meeting.

The CCSC works to promote the interaction between schools regarding the academic use of computers. The goal is to showcase different research and students in front of various faculty and administrators from the southeast. The competition is not the only event held during the weekend; the CCSC also hosts banquets, luncheons and paper presentations.

“The competition was focused around creating programs that solve problems, such as performing calculations,” Freeman said. “We formed a team last year for a virtual competition and this year expanded the group to two teams while also replacing a team member who was unable to return for this year’s competition.”

This is not FMU’s first time attending the CCSC, though it was their first in-person competition.

To try and boost the performance from the virtual competition they competed in the year before, the CS department gathered enough students to create two teams. Through practice and training, the best-performing students were placed on the first team to try to maximize success.

“To prepare, our team practiced weekly on past problems from similar competitions,” Freeman said.

After hours put into training and preparation, the team traveled to Bob Jones University to compete. During the competition, the teams were given a set of nine problems—all teams received the same problems—and they had to solve as many as possible in a three-hour time limit.

Seeing as they placed fifth overall in the competition, the team’s practice paid off. According to Freeman, their ranking was good, but the real benefit was the experience.

“Participating in the competition gave us experience in solving types of problems we would not have otherwise been exposed to in our classes, and that should be helpful to each of us in the long run,” Freeman said.

With a burgeoning program and interest in expansion, FMU’s CS program works to make a name for itself. Competitions like the CCSC prove that the CS program is something to look out for.

“I think that for the CS program at FMU, it gives the school good exposure in the larger computer science academic community and also gives us students the opportunity to meet and talk with students from other parts of the state,” Freeman said.

After this year’s competition, the CS program will continue its foray into the programming competition world. Next year’s CCSC: Southeastern Conference contest will be one to watch.