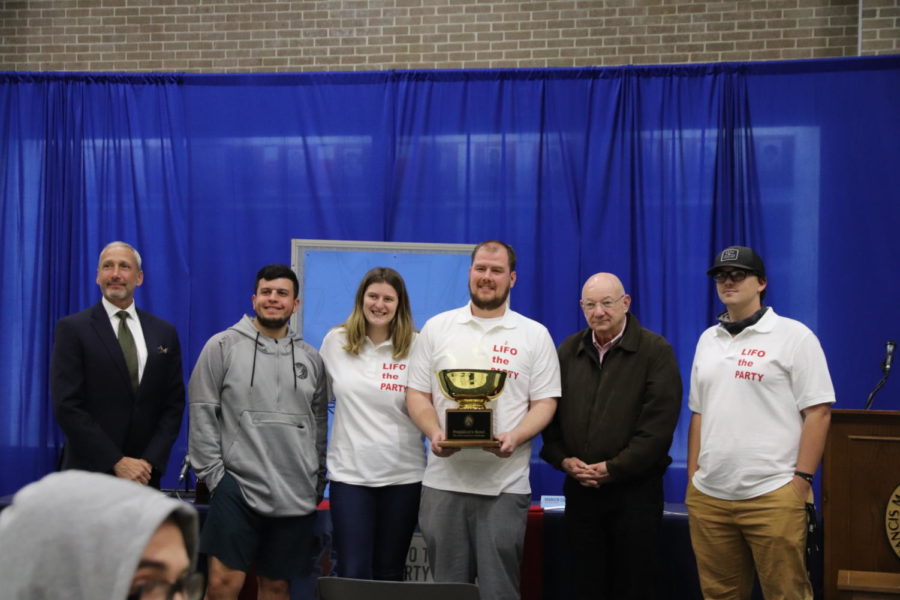 LIFO the Party stands with host, Hubert Setzler, and President Carter as they accept the award for first place.

LIFO the Party, a team from the Accounting and Finance Club (AFC), won the fifth annual President’s Bowl at 6 p.m. on March 1 in the Smith University Center Commons (UC).

On the Patriot side of the bracket was LIFO the Party with members Taylor Gribben, James Gaskins and Brandon Cook, christened with the motto: We mean business.

Fighting for the Swamp Fox side of the bracket were the Pi-Rates representing the Math Club. Whenever a player answered a question correctly, a team member from the audience yelled in support of the team. Some members also wore pirate hats to show their loyalty.

The host, Hubert H. Setzler III, a professor of business and management, asked 14 questions total with three “key questions” for potential bonus points. The trivia varied from questions about the author of the novel “Holes” to a Super Bowl commercial about Doritos.

While the first half of the tournament was close, LIFO the Party held the lead by five points with a score of 40-35 at halftime.

After halftime, the competition continued as members of both teams buzzed in to answer questions. In the end, LIFO the Party claimed the spot of the fifth annual President’s Bowl victors with a final score of 75-50.

The AFC was not the only group to take home money. The semi-finalist teams, the KAs, representing Kappa Alpha Order, and News Clues, representing “The Patriot,” both received $250. For the runners-up status, the Pi-Rates won $1,000 and decided to split the money amongst the members. The winning team, LIFO the Party, received $2,000 and will host the FMU President’s Bowl trophy. Though organizations have used their earnings in the past for remodeling or new equipment, they plan to do something different with their money.

“One of the plans we intend on doing with it is donate it to the camp of one of our charities of choice that we will discuss as a club,” AFC member James Gaskins said. “Another thing we plan on doing is the AFC, Accounting and Finance Club, has a big annual alumni night, so we plan on making it extra special with more alumni, better speakers and, of course, good food.”

The President’s Bowl happens annually at FMU. Each tossup question is worth 10 points, and if a team buzzes in before the “power mark” and answers correctly within two seconds, they receive an additional five points on top of the initial ten points.

This year’s President’s Bowl had the highest number of teams compared to the past competitions, with 17 different organizations and teams competing against each other. Team ACS, representing the Chemistry Department, took the trophy for the first two President’s Bowls in 2018 and 2019, followed by Physics and Engineering in 2020 and Amine Dream Team in 2021, also representing the Chemistry Department. Those interested in joining the next President’s Bowl require a minimum of three members and a faculty advisor. More information can be found at https://www.fmarion.edu/.