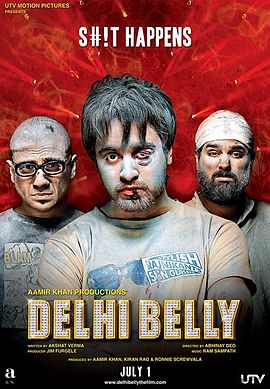 Aamir Khan decided to risk his spotless Bollywood career with the production of “Delhi Belly” (2011). This movie, according to Indian standards, has a slew of adult content; however, an American viewer would not find this content atypical. In an industry where foul language and sexual content are not well received, this movie topped the box office.

Tashi, Nitin, and Arup, three friends who share an apartment, are unknowingly targeted by a gangster due to a mix-up in the delivery of a package.

Soniya, Tashi’s fiancé, was initially given the package, but she hands it off to Tashi. Because of his busy schedule, Tashi then asks Nitin to make the delivery. Nitin gets an unexpected case of “the shits” and pleads Arup to deliver it for him.

With the original package, Nitin also gives Arup a box of rather runny fecal sample to drop off at the pathologist’s office. You can only imagine what the gangster finds when he opens the awaited package.

“Delhi Belly” deviates from Indian cinema by including only one short musical score, unlike several longer ones seen in almost all other Indian films. This movie maintains a fast pace and I found myself either chuckling or laughing out loud throughout the entire movie.

Though all three friends have their own separate lives, the convoluted plot arises from calamities in their misadventures. Vijay, the gangster, was a seemingly benign villain who was only a threat to those who crossed him. His rather quasi-calm nature in dealing with others makes his interactions hilarious.

The movie also briefly explores the lives of supporting characters, adding depth to the main plot. For example, there is a sub-plot of the landlord’s sexual deviance which is unsuspectingly exploited by Nitin for blackmail. After the landlord’s help, Nitin has a change of heart and relinquishes his power over the landlord.

Rated R, this movie is geared towards young adult audience and has healthy portions of violence, love, sex, heartbreak, humor, goofiness, and eccentricity.

Though mainly in English, “Delhi Belly” is for anybody who enjoys foreign cinema and does not mind reading subtitles sparingly. The Indian accent and the back-and-forth from English and Hindi may cause slight confusion. There might also be a few instances where an American viewer may not get a joke because of cultural barriers. Neither of these reasons should be considered as a deterrent to those who enjoy good comedies.