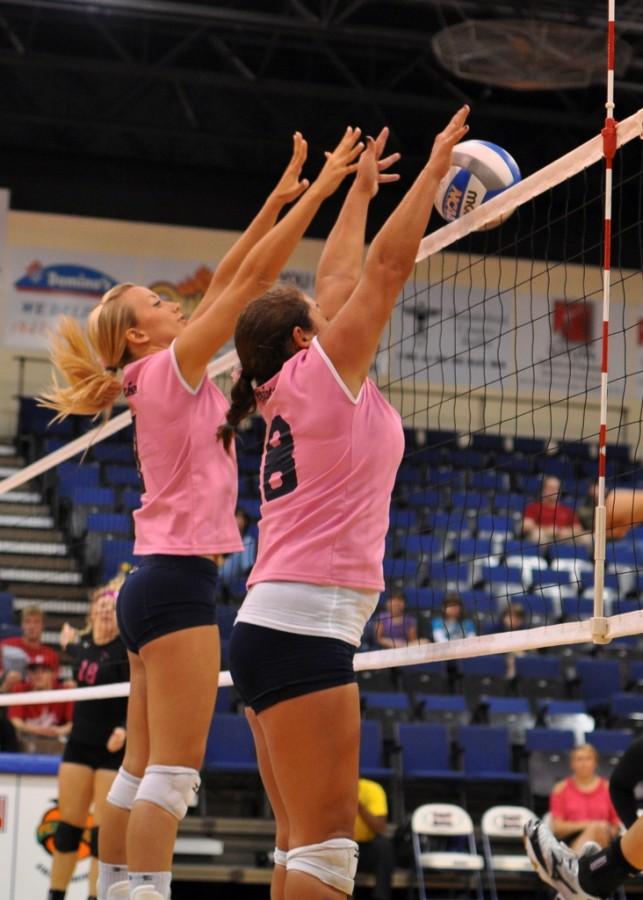 Fans and supporters were out in full force on Tuesday, October 12, as the Patriots volleyball team defeated the Converse College Valkyries in the third annual Dig Pink Match.

“It’s an excellent opportunity for Francis Marion University as a whole to support such a worthy cause,” Coble said.

FMU’s volleyball team wore their pink jerseys while Converse College sported black jerseys with pink numbers for the special volleyball match. A pleased crowd looked on as both teams displayed great hustle and did a solid job of communicating with their teammates. In the end, though, FMU proved to be too much for the Valkyries, winning the match three games to none, 25-17, 25-17, 25-14.

Junior Ashlee Crook, whose family came from Denver to watch her play, led the way in kills for the Patriots with nine, while senior Mallory Eggert and freshman Riley Forester both had seven kills of their own.

As a team, the Patriots outscored the Valkyries in kills, aces, and blocks. For Head Coach Regina Schantz and Converse College, junior Val Thoms had six kills and 10 digs and junior Jameiha Maxwell delivered 17 digs.

The game improves fifth year Head Coach Paul MacDonald and his Patriots’ season record to 13-7 and adds a game to the Patriots’ now three-game winning streak. The non-conference loss against FMU drops the Valkyries’ record to 3-15.

FMU is hoping to continue its winning ways as the volleyball team prepares for the Pacer Volleyball Invitational on Oct. 22 and 23 in Aiken, S.C. and the Peach Belt Conference Tournament in Savannah, Ga. next month.

As the Patriots marched on to victory, the season-high crowd of 283 watched with excitement and encouragement.

Sophomore Jeremy Moore took part in the activities at the game, which included a volleyball serving contest during the break between games two and three.

“I like the atmosphere and I know some of the players so I come and show my support,” Moore said.

After the non-conference victory against Converse College, the Patriots jump back into conference play with just a few weeks remaining in the regular season.

Donations to the Dig Pink campaign can be made online at https://www.side-out.org/application/teams/team_page/679. Proceeds from all donations will benefit the Side-Out Foundation, a national 501(c)(3) located in Washington, D.C.