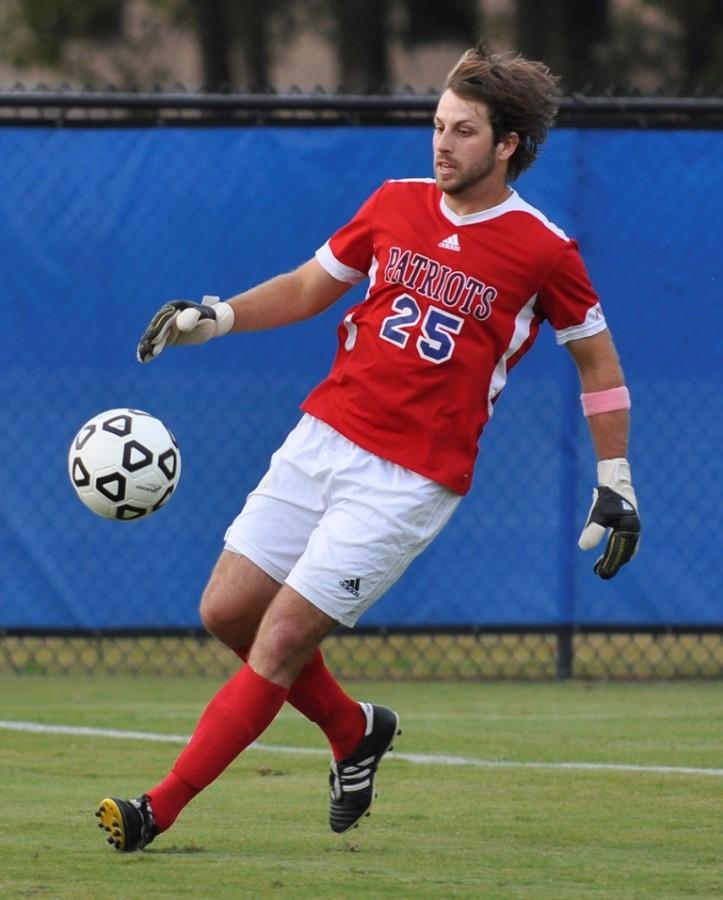 Pink ribbons spray-painted onto the soccer field marked the occasion for the men’s soccer game on Monday, Oct. 18. The game marked the 5th annual Passionately Pink for the Cure Match hosted by ZTA.

The purpose of this annual contest is to raise awareness for breast cancer, which, according to breastcancer.org, will infect about one in every eight women in the United States.

“What we’re doing today is raising money for breast cancer education awareness,” Vice President of ZTA Mary Ellen Baker said. “We partner up with the men’s soccer team; together we host the soccer game. All the proceeds that we get from bake sales and t-shirt sales go to the Susan G. Komen foundation.”

Throughout the course of the game, ZTA would raffle off such items as Salty’s t-shirts, gift cards from Outback Steakhouse and pizza from Papa Johns and Stefanos. The game also came complete with a yogurt eating contest during halftime.

While a burst of pink shone around the opening to the soccer field, the Peach Belt Conference game was not to be overlooked. The Patriots entered this game with a season record of 5-7-1, and a conference record of 2-3. Their opponent, the Lander Bearcats, came in holding a record of 7-5 on the season, and 5-0 record in the Peach Belt Conference. It was a tough challenge for the Patriot to begin with, as Lander held a three-game winning streak entering the game.

The Patriots got on the board first with a goal in the 18th minute by freshman forward Justin Walton. The goal was the first of Walton’s collegiate career. It was assisted by senior midfielder Chris Foltanski and freshman midfielder Shane McConlogue.

Unfortunately for the Patriots, Walton’s goal was the only one the Patriots would be able to score.

In the 77th minute, Lander almost scored their third goal of the afternoon as the Bearcat’s freshman defenseman Adam Wolf took a short shot, but he misplayed it and the ball went up and over the top crossbar.

Although they were down, the Patriots refused to give up. In the final minute of the game, the Patriots staged a late onslaught against Lander. Shot after shot was taken near the Bearcats goal, but none were able to find the back of the net. The game was summed up by a Patriot shot bouncing off the crossbar of Lander’s goal with just six seconds left in the game. Because of their late rally, the Patriots would outshoot the Bearcats 10-9.

“For the most part the game itself was fairly even, both teams had chances,” Patriot Head Coach Kevin Varnado said. “I think the biggest difference was they scored theirs and we had a couple of ours obviously at the very end that we didn’t score. We could have obviously had the chance to win the game, or obviously at least tie it. They were a little better at doing what they wanted to do.”

The same amount of passion and pink is planned for next fall as ZTA will team up with the men’s soccer team to host the Passionately Pink for the Cure soccer game once again.