Patriots out-played at home by UNCP 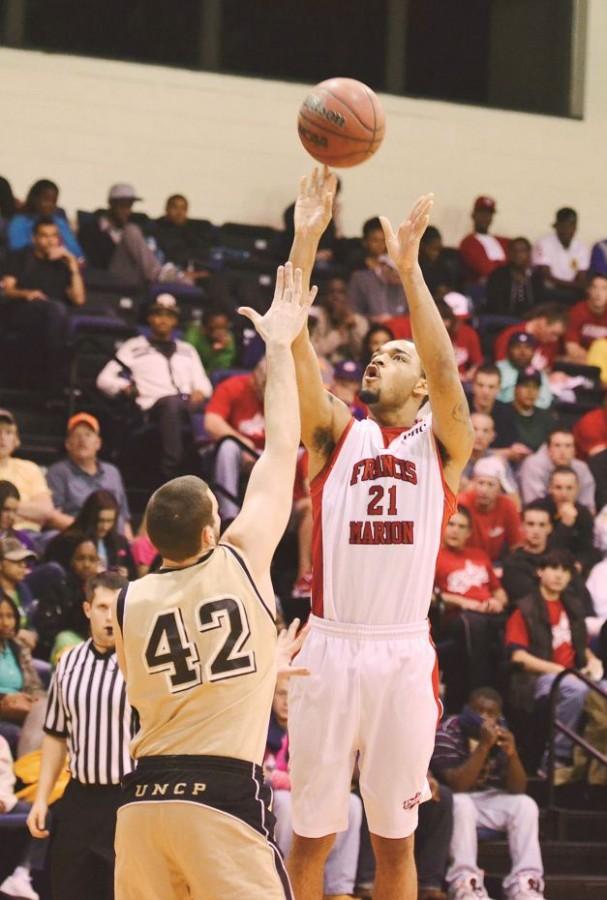 The Patriot men’s and women’s basketball teams suited up with their identical 13-5 (6-4) records to take on conference foes UNC-Pembroke on Wednesday, Feb. 2. The women handled their game; a 75-60 win brought their record to 14-5 (7-4) and extended their winning streak to six. The men however, were defeated 90-81.

Though the Patriots have statistically been playing better down the stretch of close games, and despite a 24 point performance by the men’s team junior forward Liki Turner and a 22 point career-high by the men’s senior swingman Dominique Coleman, the Patriots were outplayed at home in front of a crowd of 1,100.

A break from the action saw kids from the Mullins Recreation Department compete in a shootout and a halftime performance by the Greenwood Elementary School cheerleaders.

At halftime, the Patriots trailed by ten, 52-42. The 52 points were the most points the Patriots had given up in one half all season. Although the Braves were statistically the best rebounding team in the Peach Belt Conference coming into the game, they had only out-rebounded the Patriots 20-18.

While usually a better second-half team, the Patriots could not manufacture a large enough rally to overcome the deficit. The closest they would get was within three before seeing the Braves once again pull away. The Patriots wound up being out rebounded 38-33.

While both teams shot well from the free-throw line, the Patriots were slightly better. They made 24 of their 31 attempts compared to the Braves making 23 of their 33 attempts.

The Patriots also shot better from behind the arc, hitting seven of 20 three-pointers compared to five out of 16 for UNCP.

The loss was only the second home loss all season for the Patriots.

“We were very fortunate to give it a run down the stretch,” Edwards said.

The Patriots are, according to Coleman, working to maintain second place in the PBC East.

After this game the Patriots were 6-5 in the conference, tied with Armstrong Atlantic, only a half game ahead of UNCP and USC Aiken, and looking up at Augusta St. in first.

The Patriots continue their escapade through the PBC conference for the remainder of the season. Both the men and women’s teams face key conference match-ups as the season winds down and the playoffs heat up!