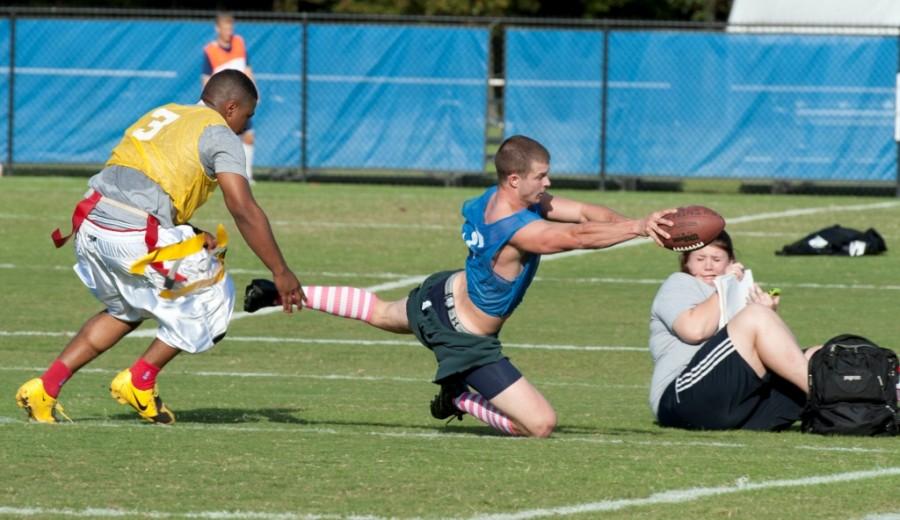 On Oct. 13, the Red Raiders won 21-12 in the flag football game against The U, formerly known as the Hurricanes.

In a rivalry game that pitted the dominant Red Raiders against the agile runners of The U, the Red Raiders protected their reputation as the team to beat on campus.

The game began with The U having first possession, and the Red Raiders lined up in defense.

The first score of the game went to The U’s Andrell Collier-Green, a freshman majoring in computer science, within the first three minutes. Collier-Green said that the only thought going through his mind during the game was his will to win.

Red Raider’s Cory Scott, a senior majoring in economics, responded soon after with a touchdown of his own.

“It felt good. My man, Eric Canzater, left a spot open for an inside run,” Scott said.

Both teams did not make the 1-point conversion, so the score was tied 6-6 at the eight-minute mark.

The next points that were put on the scoreboard were two points in favor of the Red Raiders because of a safety call.

Jourdan Winans, a senior majoring in biology and the only female on the field, was the one who pulled the flag turning the play into the safety.

With one minute left in the first half, the Red Raiders were 5 yards away from putting another 6 points on the board when freshman mass communication major Jordan Tindal, intercepted a pass.

The half ended with a 2-point lead in favor of the Red Raiders.

The second half started with a touchdown made by senior marketing major Grayland Murdock.  The touchdown and the 1-point conversion extended the Red Raiders’ lead by 7.

The U returned with a touchdown of their own with ten minutes left in the game. The score was 15-12 with Red Raiders leading the way.

Red Raiders’ Rashid Boone, a senior mass communication major, made the last touchdown, which made The U’s victory almost unattainable.

The flag football game ended with the Red Raiders claiming a victory over The U, 21-12.

There were a few instances in the game in which tempers flared and the Head of Intramural Sports Derrick Young, said that it was a common occurrence with overly competitive players.

“They are young men trying to become young adults, but in the heat of the battle they tend to forget that it is just a game,” Young said. “It’s for fun. As director, I have to remind them.”

There were three other flag football games played on Oct. 13. The KA fraternity was supposed to play BCM at 4, but when KA did not show, BCM took the win.  At 5 p.m., the Swamp Fox Crusaders took the 39-0 win from the TKE fraternity.  Also at 5 p.m., it was the battle of the sororities with a game between KD and ZTA in which ZTA won 28-0 over KD.