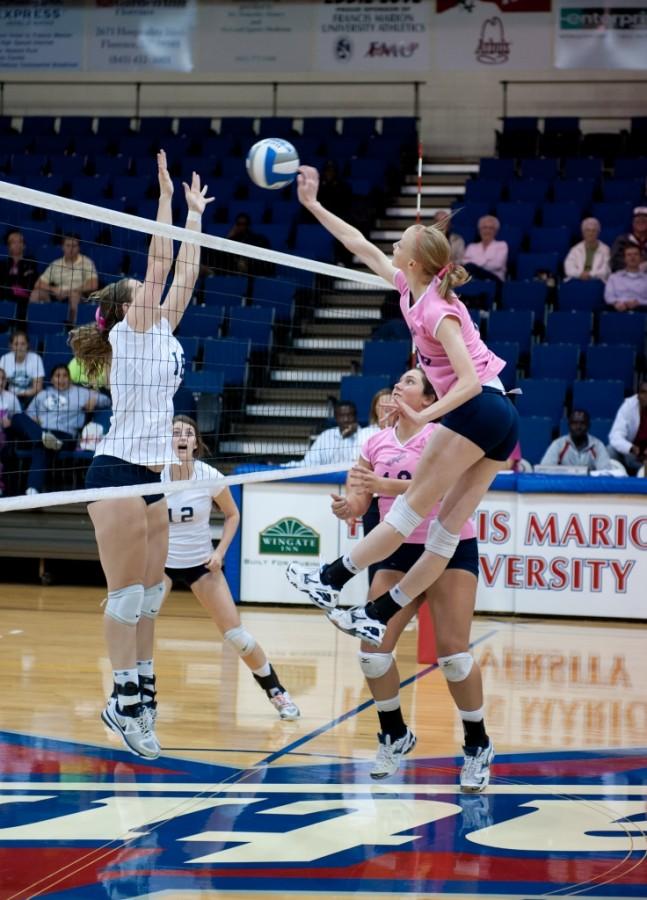 Every year during the month of October, The Side-Out Foundation, FMU volleyball and Zeta Tau Alpha sorority join forces for the Dig Pink match. The Patriots wear their pink jerseys on Dig Pink Night, a night dedicated to raising funds for and awareness of breast cancer.

Teresa Friess is the mother of Patriot senior outside hitter Ashlee Crook. Friess expressed pride when discussing the significance of the special match.

“Raising awareness of breast cancer is not just to be done by families already affected by the disease,” Friess said. “The reality is any one of the girls on our team could be affected. This event is a concentrated effort by everyone to do what we can now and just make more people aware.”

Friess also said that by having the annual Dig Pink match, Francis Marion is showing concern for the welfare of the students.

“We want all our kids to contribute to the good of society,” Friess said.

FMU scored the opening four points in the first set and never trailed. Coker jumped out to a 14-9 advantage in set two, but the Patriots rallied to tie the score at 17-17 and eventually scored seven of the set’s final eight points to win 25-19. Coker held a slight lead in set three until FMU went ahead 13-9 following a 5-0 run. Leading 15-13, the Patriots finished the match with a 10-3 spurt.

Senior middle blocker Danielle Parker, who had six kills of her own, said that her team played solid volleyball against Coker.

“Our whole team was playing well,” Parker said. “Our ball control was really on tonight, and our setter was making good decisions.”

Parker said that the Patriots played Coker tough by keeping the Cobras from effectively setting up their offense.

The win gave the Patriots their third straight victory. FMU improved its record to 10-14 and dropped Coker’s record to 8-15. The Patriots are preparing for the Peach Belt Conference Tournament in Augusta, Ga., on Nov. 12 and 13.

Donations to the Dig Pink campaign can be made online at www.side-out.org. Proceeds from all donations will benefit the Side-Out Foundation, a national 501(c)(3) located in Washington, D.C.