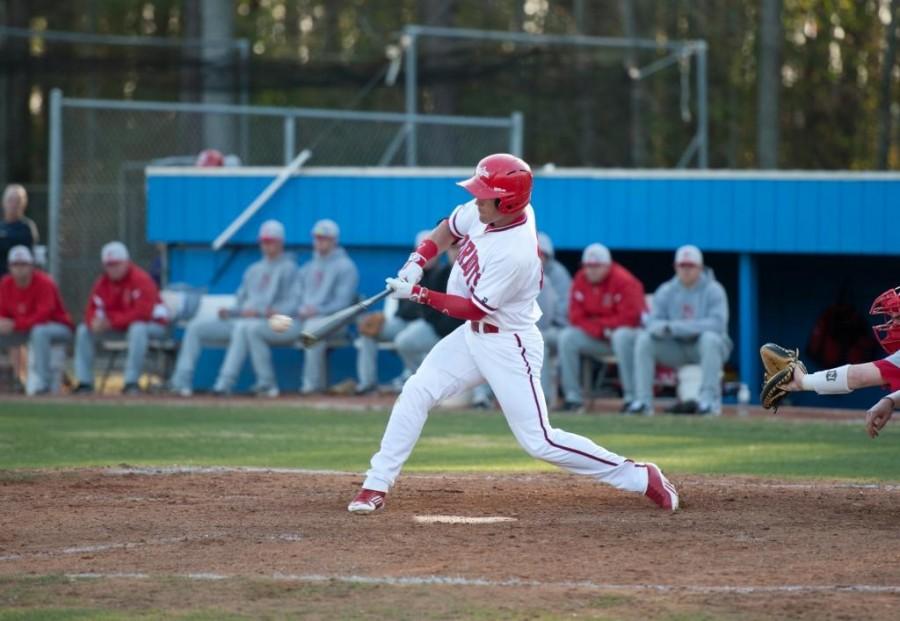 A five-run bottom half of the seventh inning was the key in a great comeback victory on Wednesday, Feb. 8, as the Francis Marion University baseball team defeated the Newberry College Wolves, 5-4.

As the bottom of the seventh inning began, the Patriots trailed the Wolves 4-0, having only amassed three singles in the game up to that point due to solid pitching by Newberry starter Josh McElwee.

“He (McElwee) had good velocity and good speed,” Wilson said. “He may play some professional ball.”

Wilson also said that the pitching of McElwee forced the Patriots to hit a lot of balls in the air, instead of hitting the ball down.

Even senior second baseman Brock McCallister admitted that McElwee was causing some trouble for the Patriots’ offense.

“He had a good slider that kept our hitters off-balance,” McCallister said.

To make matters worse for FMU, McElwee even showed off his hitting skills by drilling a 390-foot two-run home run over the left-center field fence in the top of the seventh to increase the Newberry lead to 4-0.

But the drama was just beginning. FMU’s offense struggled for much of the game, but they never lost heart and fought back in the bottom half of the inning.

McCallister said that the calmness the Patriots displayed in the midst of adversity is one of the hallmarks of the team, and that it comes from head coach Art Inabinet and the staff.

The potent Patriot offense got things going in the seventh with a fielder’s choice fly ball to left field from Tyler Boyd, which drove in FMU’s first run.

Trailing 4-1 with two outs and runners on first and second, Patriot leadoff batter Michael Wilson reached on a fielding error by the Newberry first baseman, who was a late-game defensive replacement.

McCallister followed by driving in the second run with an infield single. McCallister said that his team hit the ball better later in the game; he also said that a big part of his key hit was just luck.

Senior center fielder Buddy Sosnoskie tied the game at 4-4 with a two-run single up the middle, and the Patriots took the lead on an RBI-single to right-center by junior infielder Stephen Tarkenton.

Designated hitter John Jones had a stellar game for the Patriots with three hits in his three at-bats, as did Tarkenton, who was 2-for-4 with an RBI.

Junior southpaw Evan Brown (0-1) was the losing pitcher for Newberry, while FMU junior righty Gary Ashcraft (1-0) earned the win in relief in his first appearance as a Patriot.

Junior righty Don Sandifer came in and pitched a scoreless ninth frame to earn his first career save.

The victory improved the Patriots’ record to 2-1, while dropping Newberry’s record to 1-4.

The Patriots’ next home game will be Feb. 22, an afternoon affair against Mount Olive Co