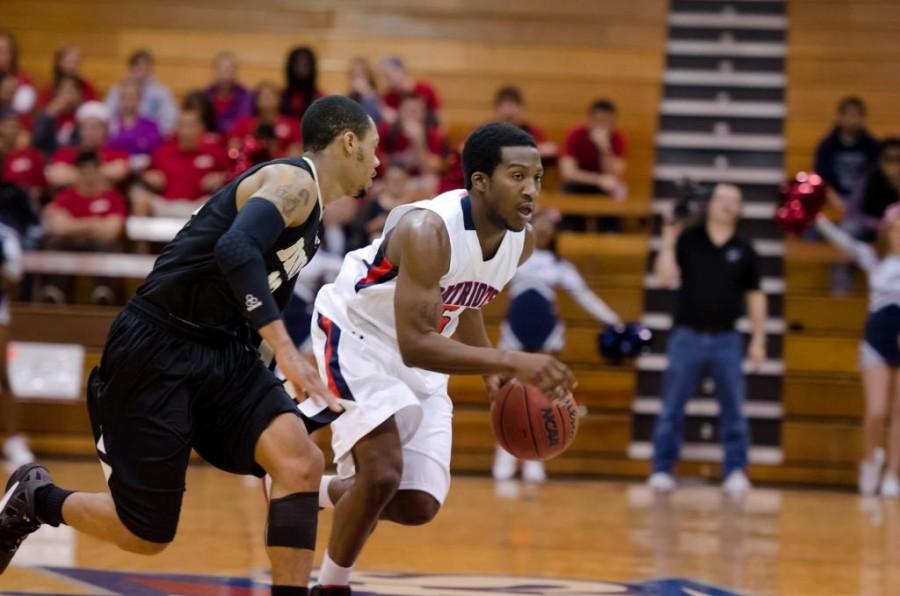 Francis Marion University Patriots men’s basketball team added another game to their wins on Thursday, Feb. 2 in a game against the University of North Carolina Pembroke Braves.

The game started in Pembroke’s favor when senior, guard, Marcus Heath scored 2 points in the first 13 seconds of the game, followed by another 2 points made by freshman Ben Jacobs.

FMU did not get on to the scoreboard until senior Andrew Smith made a layup a minute and a half into the game putting 2 points on the board.

After that, UNC began to pull ahead making seven more point in the next three minutes. The score was 2-11 in Pembroke’s favor. That was until Smith made another layup; at that point, that FMU began to make it a closer game.

The Braves stayed ahead of the Patriots during the first half of the game. At half time, the score was 33-41 in Pembroke’s favor.

But FMU was not done just yet, according to freshman, business management major, Clayton Williams.

“They turned it up on defense in the second half,” said Williams.

At the start of the second half, FMU gained new life. They worked hard to close the 8-point gap that UNC held over them.

Nine minutes into the game, junior Darryn Frazier made a three-pointer that gained the lead for FMU.

From then on, FMU held onto the lead. With 18 seconds left in the game, Liki Turner had just missed one of his free throws that was then rebounded by Jacobs who passed to Heath, who, in turn, made a three-pointer.

With 13 seconds left, there was still a chance that the Braves could comeback and at least tie the game until Heath fouled sophomore Evrik Gary.

Gary made both free throws and sealed the win for FMU.

Senior mass communication major Marcus Wright was impressed with the final score. “[The] Patriots show how brave they are against UNCP, escaping 79-74,” Wright said.

Gary, who contributed 21 points and registered 10 rebounds, and Turner, who scored 20 points with 9 rebounds were key players for the Patriots.

UNC Pembroke’s Shahmel Brackett scored 21 points for the Braves along with Heath, who scored 18 points.

According to junior business management major Derek Hosey, it’s not about single players.

“It wasn’t just about individuals stats,” Hosey said. “We won because we played as a team.”