Tennis team having season to remember 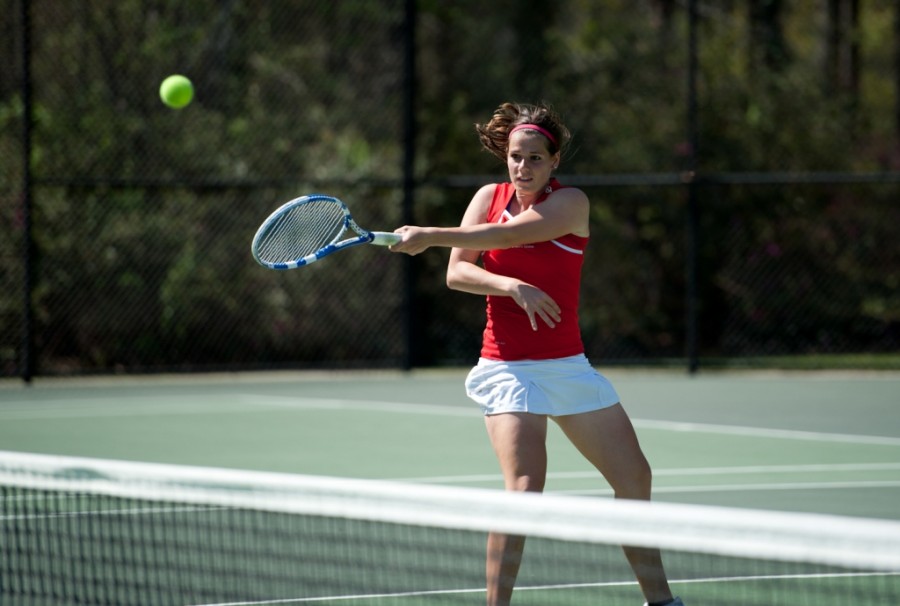 With a record of 11-1, the nationally-ranked Francis Marion University women’s tennis team is in the midst of a strong season.

In his twentieth year of leading both the men’s and women’s tennis teams, head coach Garth Thomson has been pleased with the efforts of his team. The FMU Athletic Hall of Famer and former tennis All-American lauded his players for their toughness, their confidence and their refusal to fold under pressure.

He specifically had high praise for senior and Czech Republic native Jitka Gavdunova.

“Jitka is such a great leader for the team; she pushes the rest of the girls,” Thomson said. “Her only goal is to succeed. She brings high intensity to practice and everything we do.”

Gavdunova is ranked ninth nationally and has only lost one singles match all season, falling 6-3, 6-2 to Columbus State’s Paola Cigui on March 17, a loss she has not put out of her mind.

“Mona is another great leader,” Thomson said. “She is right there at All-American status. Those two (Blauen and Gavdunova) just have a different drive.”

Meanwhile, Gavdunova said that her coach has been a great encouragement for the team.

“(Coach Thomson) really shows emotion,” Gavdunova said. “I think that it motivates us because he really cares about it. He wants it as badly as we want it.”

Thomson looked forward to the latter part of the season, saying that his team would need to be the fittest team in the PBC and work on a more aggressive game down the stretch.

Thomson said that his team would need to take better charge of their matches. The head coach said that it would all come down to heart and about who wants it the most.

FMU has had a player lose in a singles competition in only four of the team’s 12 matches this season.

Meanwhile, the duos of Gavdunova/Blauen and Tereza Baranova/Julia Graf are unbeaten in doubles play (12-0).

FMU has been winning its matches this season with ease. In only three of the Patriots’ 12 victories has the match not ended 9-0, with FMU clean sweeping the opponent in singles play.

FMU’s next match is a crucial showdown against undefeated and nationally-ranked Armstrong Atlantic State University (11-0). The Patriots will return home on April 6 in a non-conference match against local rival Coker College.