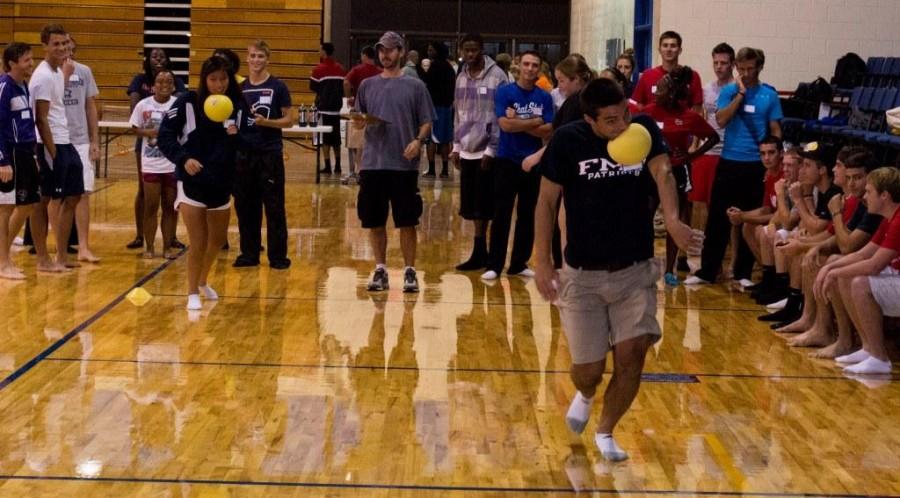 All athletes on FMU’s campus were divided up and pitted against each other in a battle of the fittest at 7 p.m. on Aug. 28.

The battle, formally known as “Buddy Night” is an almost 13 year tradition in which all athletes take the night off to have fun and socialize outside of their respective sports.

The assistant coach for the basketball team, Crayton Jones, sees it as a key aspect to the beginning of every year.

“It’s definitely a good thing for all the athletes,” Jones said. “It gives everyone a chance to meet each other, and expand their social circle so that when the time comes for them to go to games, they can cheer the players on by name and know who they are cheering for.”

The games revolved around each of the sports teams on campus. There were seven stations: basketball 3-point and free throw, dizzy bat race, soccer goal-kick, tennis, golf, an obstacle course with a egg balancing twist and a relay in which the players had to place a ball beneath their chins, run to the end of the course, run back and pass the ball to the next player without the use of their hands.

The top four teams that scored the most points overall participated in a tug-of-war competition and the top two teams would win a shirt boasting their accomplishments.

The games made it a level playing field for everyone, and jut because the player played a particular sport, did not necessarily mean that they dominated.  Men’s basketball head coach, Gary Edwards, even tried recruiting a golf player to the basketball team.

The night was charged with playful banter, friendly taunts and a buzz of comradery. The athletes made an effort to get to know their fellow players.

At the end of the night it was down to the top four teams, but only one made it all the way to the top.

Megan Mooney, a junior middle blocker for the women’s volleyball team majoring in marketing, was one of 15 people on the winning team.

“I knew we were going to be a winning team when I sat down to Cody [Farrier],” Mooney said. “We struggled a little bit when we came to the soccer stations, but we came back and fought our way to the top.”

Cody Farrier is a junior transfer student from Herkimer County Community College in New York. He plays forward/mid-fielder for the men’s soccer team.

“I am thankful for winning my first Buddy Night shirt, but next year I am going for the number one spot,” Gojic said.

Tracy Bishop, a junior majoring in history playing for the men’s baseball team, is excited to see how Buddy Night will be next year.

“This is my second year participating, and it is definitely a great way to start the year,’ Bishop said. “I am excited to see what it will be like next year.”

Not only were new champions crowned that night, but it is also revealed that the Fellowship for Christian Athletes will be starting a chapter at FMU.

Tony Abdou, made a trip to FMU to begin the chapter.

“We have tried that past couple of years to get started at Francis Marion and it is with the help and backing of the coaches and players on campus we are finally able to get it going,” Abdou said.

They will be meeting on Tuesday evenings at 9 p.m. and open for everyone to participate, not just the athletes.