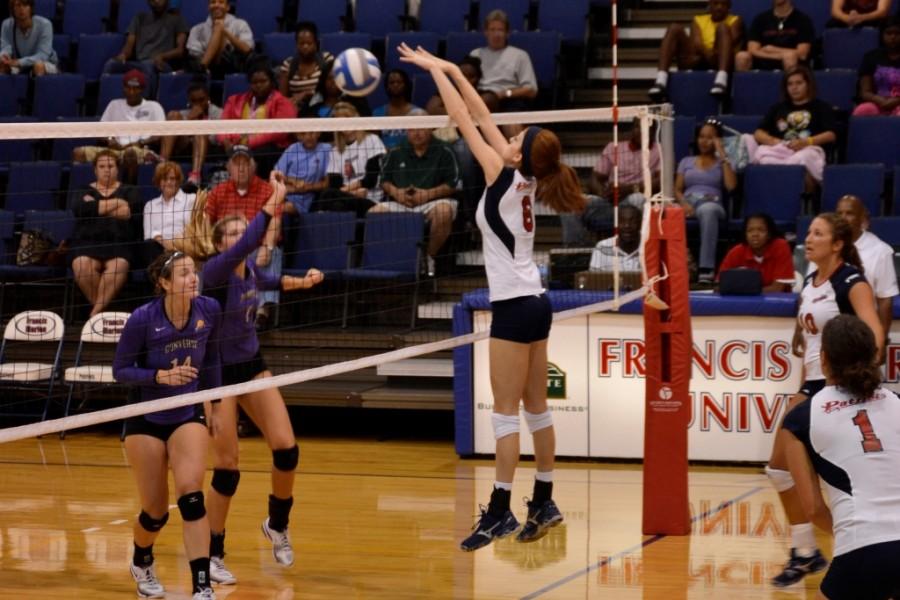 The FMU volleyball team took on Converse College for the first time in two years and claimed a victory by winning the first three sets on Tuesday, Sept. 11.

Megan Mooney, a junior majoring in business marketing, tied with junior mass communication major, Jessica Imbimbo in number of kills made in the game. Each girl slammed 11 kills a piece in the game against Converse College.

“Since the last time we played Converse College, I think we played with more fire and we had more fun this time around,” Mooney said. “I am really proud of the team.”

In the first three sets of the match, FMU racked in a total of 55 points, with top scorers being Mooney, Imbimbo, Alexandra Reed, and Liz Drewry. Mooney scored 14 points, Reed and Imbimbo tied at 12.5 and Drewry rounding out at ten points.

In the first set of the match, FMU took the win with a score of 25-15. The second match was a closer game with FMU scoring 25 and Converse College scoring their highest of the night with 21 points. The final set ended with Converse College trailing FMU 25-11.

In the first match of the night, Converse started out the match with the first point, and the second, but soon after became FMU’s ball, after Imbimbo made the first kill of the night.

The Valkyries managed to hold on to their lead for a few more plays, but then the lady Patriots began to rally. It was not long before the first set was over and the teams were preparing for the next set.

In the second match, Converse College again made the first couple of points. FMU made sure to come back. The game was a closer one with Converse College and FMU battling for points.  In the end it was FMU with the win.

The last match was shorter with FMU pulling away from Converse College early in the match.

Imbimbo, a newcomer to the Patriots, was really happy with the recent win.

“I feel like each time you go into a game you can always learn something new and grow stronger as a team,” Imbimbo said.

“Whenever FMU and Coker play, in any sport, excited is always the end result,” Montgomery said. “I am really excited to see this game, because a rivalry game is always good to boost school spirit; that is, if they are in the right context and don’t get too out of hand.”

The FMU volleyball team is now sitting at a 6-3 record so far this season with a 4-1 home record. Their next game is scheduled for another home game against rival Coker College. The game will be played on Tuesday, Sept. 18th at 7p.m.