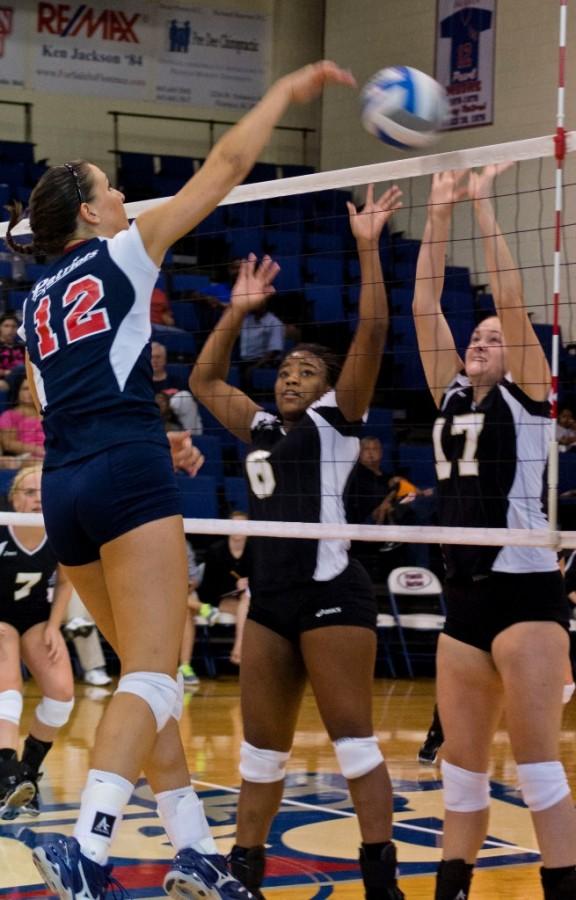 The first set almost ended in a victory for the Braves. At one point in the opening set, FMU found itself down 18-14, but the Patriots rallied and thwarted UNCP’s efforts with a kill by senior outside hitter Liz Drewry.

Although her team faced difficulty in the first set, sophomore defensive specialist and Biology major Meghan Peji knew that her team would get the win.

“The biggest difficulty was digging ourselves out of a deep hole,” Peji said.

Drewry racked up a total of 12 points and 11 kills in the match against UNCP while junior middle blocker Megan Mooney followed close behind with 11.5 points and nine kills of her own.

Junior outside hitter Paige Perreault led the team in digs, scooping up 12 in the match, while Peji had a total of 11.

Alex Matz, a sophomore middle blocker majoring in Biology, was quite proud of her team.

“FMU brought a whole new mindset to the match in the later sets,” Matz said. “Our determination to beat Pembroke rose greatly and we wanted to win out first conference match. And we accomplished that goal in our home gym.”

In the third set, FMU pounced on the Braves and never looked back. Thanks in large part to a serving streak by junior Jessica Imbimbo, Pembroke only put up 12 points in the set. Imbimbo served 14 straight times, taking the match from a 10-7 lead for UNCP to a 22-10 lead for FMU.

While FMU student-athletes were playing hard on the court, FMU fans were cheering hard in the stands. In the eyes of the officials, however, two FMU fans were showing a bit too much school spirit. Senior computer science major and former men’s basketball player Andy Smith, as well as junior finance major Jeremy Moore were kicked out of the match for being overzealous in their support of FMU.

“I was shocked,” Smith said. “Being an ex-student athlete, I have seen and heard a lot worse from fans.”

Matz was sad that the men were kicked out, but was excited to see that it did not diminish the support of the crowd.

Although he was thrown out of the match, Smith said that he plans on rooting on the FMU volleyball team for many matches to come.

“I don’t plan on getting kicked out of more games, but I will continue to support the girls like I have been all season,” Smith said. “Hopefully we don’t get any more refs on power trips.”

The next matches for women’s volleyball will be on the road, but the women will be back at the Smith University Center on Oct. 5 in a PBC match against Flagler. Peji is looking forward to the upcoming matches.

“Playing Pembroke for our first conference match was a good way to start,” Peji said. “They are a beatable team and by the looks of our schedule, the next three matches should be the same. They will give us a good confidence boost for when we play harder teams such as Flagler and Armstrong Atlantic.”