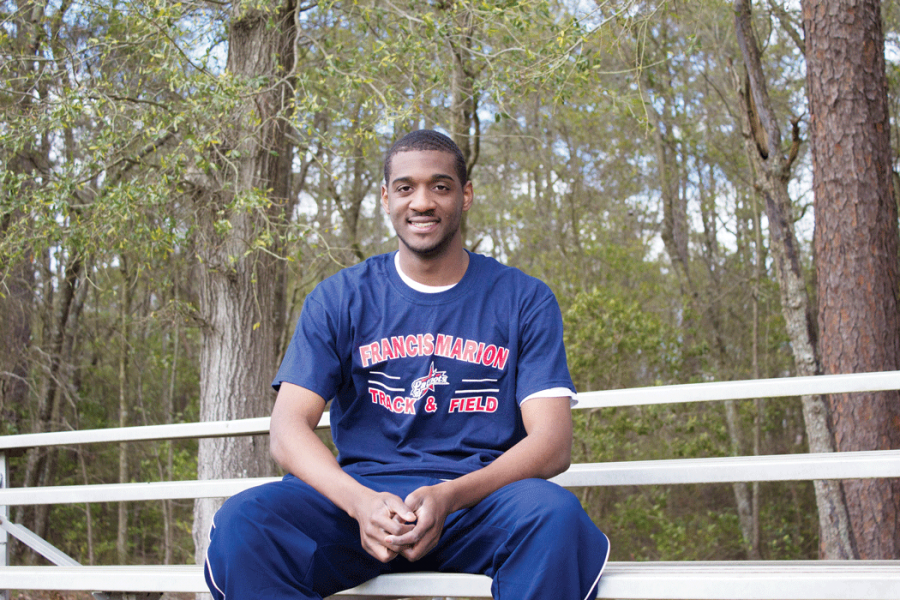 Waters, who has been on the team all four years at FMU, said high jumping has been a joy for him.

“I enjoy high jumping because it is a challenging event that requires talent,” Waters said.

Although Waters will not be able to compete with the school, he can train and compete independently in track meets.

On March 8, Waters set a new meet record at the 2013 Palmetto Classic in Mount Pleasant, S.C. by clearing a height of six feet, 8.75 inches.

Waters said the key for him was self-assurance.

“I felt very confident that I was going to set the meet record,” Waters said.

Meanwhile, Waters said he is working to beat the FMU record of six feet,10.75 inches. The senior said he is only one inch from tying and “firmly believes” that he will break it.

Waters’ best jump is 6 feet, 9.75 inches. He cleared this height at the USC state meet last April. Waters has set a personal goal to jump the height of 7 feet.

“Tyler is the complete package,” Bluman said. “He has talent, work ethic and has a great mind set.”

Bluman said that not only is the senior at the top of his game on the track but that Watersis also a solid performer in the classroom.

Blumansaid Waters’ record of 78-12 is the result of steady development over the past four years.

“Well athletically it is easy to see his improvement,” Bluman said. “He has always been great at his event.”

Although hehad been interested in high jump since 8th grade, Waters said he did not get involved in the sport until his junior year at CHS.

“In middle school, my coach thought I was too short to high jump, so I continued to run the mile and half mile,” Waters said.

It was during his junior year that Waters said he discovered he could be successful in the high jump.

“Each time the bar rises, a new obstacle presents itself,” Waters said. “Fortunately, I happen to be gifted at this event, so clearing each height provides me with more and more confidence to clear the next height.”

During the off-season, which goes from about May to January, Waters works out about three days a week. He runs from one to three miles, lifts weights and plays basketball.

Outside of athletics, Waters enjoys spending time with family and friends as well as traveling.

Waters is double majoring in finance and management with a concentration in supply chain in management.

After he graduates in May 2014, Waters plans on getting a job that pays well so he can go to graduate school if he chooses.