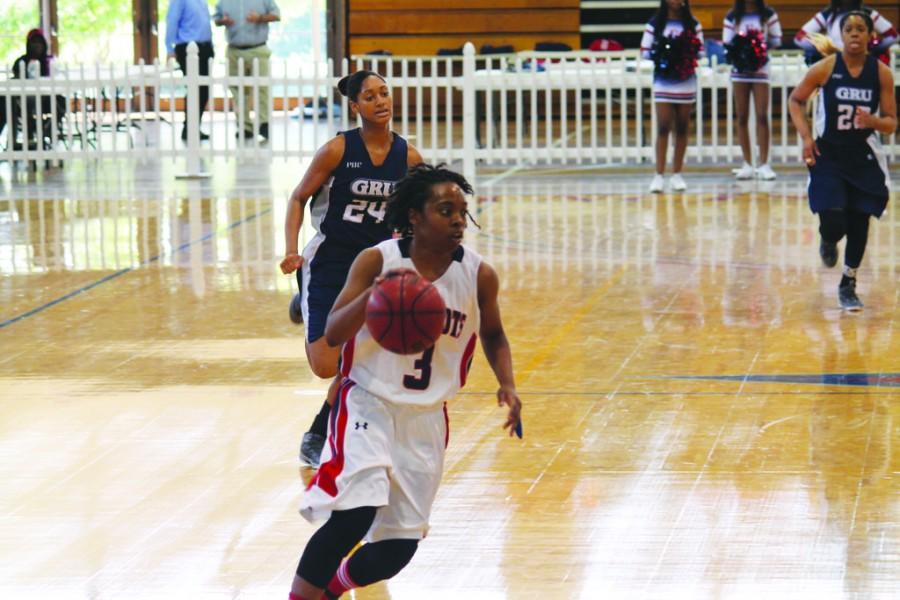 This Patriot victory gives the team an overall season record of 12-12 and a Peach Belt Conference (PBC) record of 7-11.  After this game, the FMU women’s basketball team ranked fourth in the PBC, taking the final opening in the impending tournament.

The game started out with the Patriots taking an early lead against the Jaguars with a score of 7-0.  Before the first timeout, the Patriots had increaded their lead by three points, holding a score of 37-27 and their largest lead for the game.

With 17 minutes left to play, the GRU Jaguars took the lead with a score of 44-43.  The teams continued to fight for the win, and they went back and forth in score for a total of ten times.

In the second half, Erin Pinkett, senior guard, scored a much needed three-pointer, bringing FMU from behind 61-60 to a two point lead with just over two minutes on the clock.

The GRU Jaguars continued fighting, but when Jemimah Ashby, senior guard, attempted to sink a three-pointer and tie the game.  Mills grabbed the rebound and was fouled soon after.  Mills then sunk both of her free throws and gave the Patriots a five point lead with only ten seconds left in play.

With the game appearing to be in the Patriot’s hands, Marissa Mandelove, freshman guard for the Jaguars, scored a three-pointer, allowing her team to close in.  At this point the Patriots were only two points ahead, but Mills was fouled again and made her next two free throws, bringing the final score to 70-66 and sealing the victory for her team.

FMU’s women’s basketball team ended their season on March 1 in a home game against Lander University with an overall season record of 13-13.