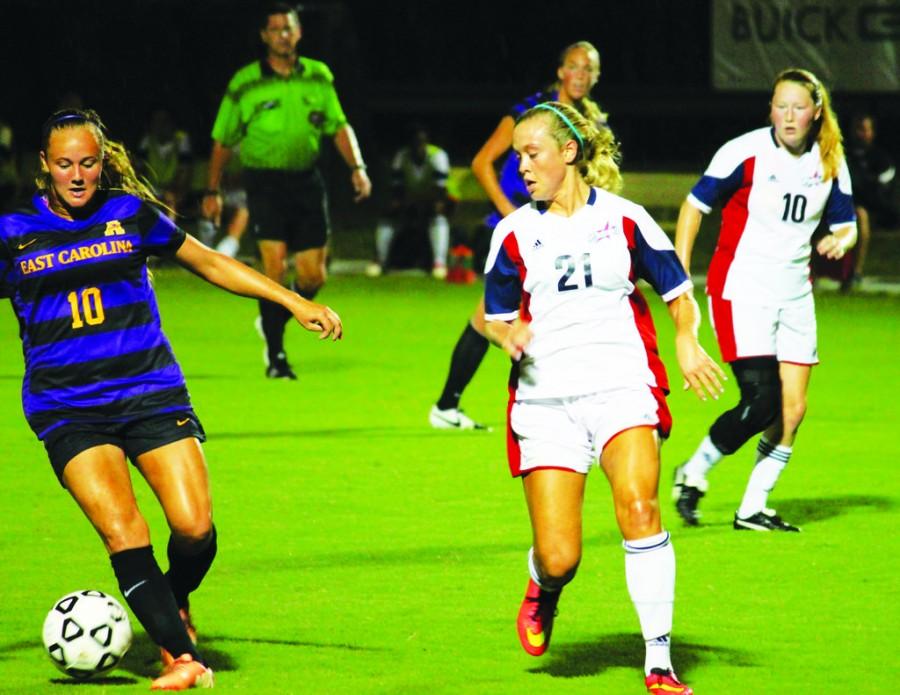 The Francis Marion University (FMU) women’s volleyball team finished 2-2 in their first four games of the 2014 season during the FMU Invitational Tournament, held in the Smith University Center.

Six teams played during the two-day tournament, with each team playing four games throughout.  The only team that FMU did not play over the weekend was Lander University, a Peach Belt Conference (PBC) opponent who they will face twice, later in the season.

The Patriot’s first match was set for 4 pm, Friday, Sept. 6 against the University of Mount Olive.  In their home opener, FMU easily swept Mount Olive in three sets (25-14, 25-17, 25-20).  Junior outside hitter Alexzandra Reed put away 11 kills during the three-game sweep with no errors.

The lady Patriots didn’t stop there; they rallied for a nearly impossible comeback victory over Shorter University Hawks at 8 pm.  The Hawks led two sets to one and seemed as though they would easily take set four when FMU fell far behind 22-9.

After a few errors by Shorter, as well as timely kills from Reed and sophomore Caroline Boone, the Patriots gained momentum at 23-13.  Junior libero Jessica Amador then served for 10 straight points to tie the score.  FMU went on to win the match 28-26.

The momentum carried over into the fifth set where the Patriots came out on top, 15-10 and remained undefeated for the day.

During the match against Shorter, Amador finished with 22 digs and 5 aces; while Reed posted a double-double with 13 kills, as well as digs.  Senior setter Sloane Shank also helped the offense by dishing out 28 assists.

“I believe the team did very well with execution and performing under pressure,” Reed said. “The unity, energy, and communication during both the Mount Olive and Shorter games helped the team continue to fight effectively and pull through the ruts we put ourselves in.”

The Patriots could not bounce back for their match against Mars Hill University, as they were swept in three straight sets (25-20, 25-20, 25-22). They went winless for the day.  The Patriots were led once again by Reed who recorded her second double-double with 13 kills and digs.

Shank, who totaled 132 assists for the weekend, knows that communication and energy was the difference between Friday and Saturday’s matches.
“Friday we were full of energy and communicated very well which lead to two successful matches,” Shank said. “Saturday was still a good day for us; we just had less communication on the court, leading to more unforced errors compared to the games on Friday.”

Head Coach Paul MacDonald recognized both the team’s strengths and weaknesses during the weekend matches.

“We can pass and defend well, and when our serve is on we are a tough team to beat,” MacDonald said. “Everything we do really starts with our serve, pass, and defense.”

The Patriot’s next games are set for Sept. 12-13 as they travel to Aiken, SC to play another four matches (against???).  These will be the first away games for the team this season, and MacDonald realizes that generating a home crowd feel will be important to the team’s success.
“The boost we got from our home crowd during our home tournament really created a fun environment that pushed our players to play at a high level,” MacDonald said. “Away from home we will be solely responsible for creating that home gym feel without our hometown fans in the stands.”

The Patriot’s return home is set for Sept. 19, for their first PBC matchup against the University of South Carolina-Aiken.  The first serve is set for 7 pm.