Patriots prevail at Hartzler, improve to 5-1 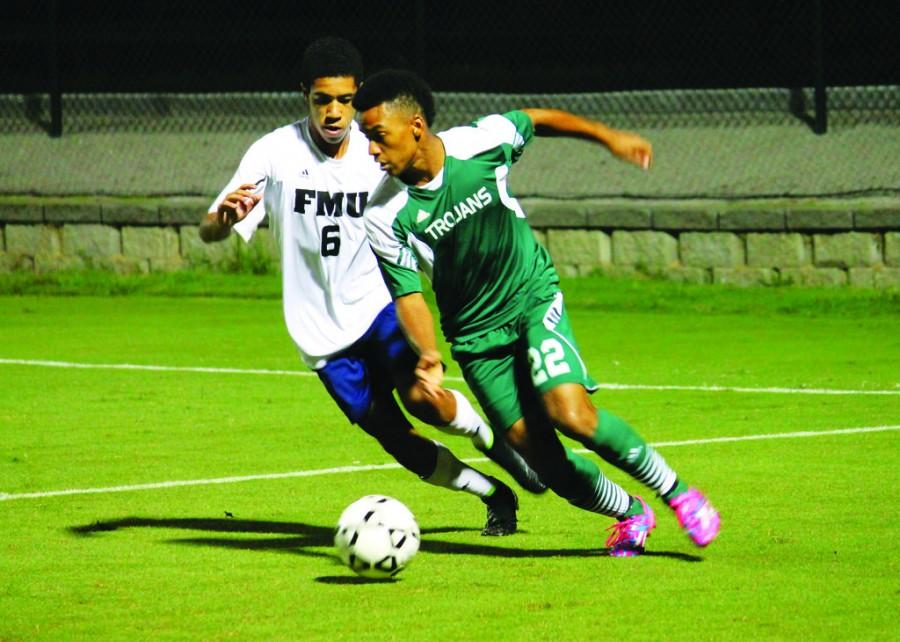 The Francis Marion University (FMU) Patriots took to their home pitch on Thursday, Sept. 25 against the Mount Olive Trojans. The game was originally scheduled to be played on the Trojans home field, but due to continuous rain storms in eastern North Carolina the game was moved to FMU’s Hartzler field.

The field was damp from the light drizzling rain that fell throughout the contest. These wet conditions affected both teams at first as both the Spartans and the Patriots were rather sloppy with their control. After a few uncomfortable moments, both teams settled into what would be a tough and physical game. The constant pushing and shoving warranted 35 fouls and four yellow cards between the two teams.

The goalkeepers on both sides of the field were tested numerous times. The Patriots shot the ball 13 times; 10 of which were on goal. FMU keeper Michael Warn was tested just twice with the Spartans putting only two of their eleven shots on frame. Warn came up big, however, in the 31st minute with a diving save that robbed Mount Olive of the go-ahead score. Warn held onto the shutout for the third time this season and he has been a key player in the Patriots overall 5-1 record.

The game was highlighted by the play of FMU junior midfielder Michael Ebil. Ebil was the lone goal scorer for the Patriots. His first goal came in the 39th minute. The ball pinged around the box bouncing off numerous players before it landed near Ebil’s foot. He lowered his head and with textbook accuracy he put the Patriots ahead 1-0. It was the first goal of his career for FMU.  Ebil wasn’t finished as he scored his second career goal in the 15th minute. Graduate student Benjamin Kwast’s pass was met by the powerful foot of Ebil as he buried the shot into the top-right corner of the opposing net. This goal would put the nail in the coffin and cement the 2-0 victory for the Patriots.

Ebil took none of the credit for the win and immediately shifted the congratulations to the rest of his teammates.

“We improved as a team, we always step up,” Ebil said. “We always give 100 percent and we really implemented that into the game today.”

The Patriots will carry this momentum into a three-game road stretch starting Sept. 27. The Patriots return to Hartzler field on Oct. 8 marking the start of a three-game home series. The FMU Patriots, with their win against the Spartans, boost their record to 5-1, their best overall start since 2003.