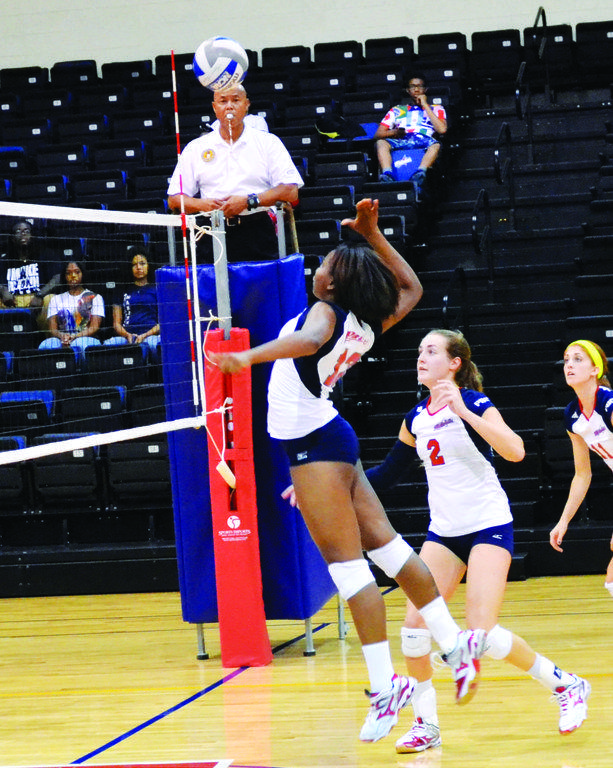 The Francis Marion University (FMU) volleyball team starts Peach Belt Conference (PBC) play at 1-1 with a win over Flagler College and a loss against the University of South Carolina-Aiken (USCA).

FMU led initially again in set two, but another large-point run from the Pacers put them in cruise control to take set two, 25-17.

Following intermission, the Patriots came out firing in the third set, hoping to prevent a three-game sweep.  Tied at 20-20, FMU closed in on the win, but three timely kills by USCA and a hitting error by the Patriots proved fatal for FMU.  Aiken earned the win and the sweep, 25-21.

On Sunday, Sept. 21, the lady Patriots hoped to bounce back from their recent loss and break even in PBC play against the Flagler College Saints.

FMU fell in the first set, 27-25, a score that remained close even with several unforced errors by the Patriots.  The second set was a different story, as FMU downed the Saints, 25-19.  The Patriots hit their stride in the third and fourth sets with substantial wins over Flagler.  FMU dominated in set three, 25-16, and carried that momentum into game four, putting the match away, 25-18.

In the match against USCA, junior Alexzandra Reed led the team in kills with 14.  Sophomore Chiquita Rivers was close behind with 12 kills.  Rivers also tallied three blocks during the match and earned Player of the Game honors.  Defensively, junior libero Jessica Amador dug up a match-high 18 balls.

Against Flagler College, FMU returned to full strength after a string of injuries, and it showed.  Reed posted a double-double with 14 kills and 12 digs.  Sophomore Caroline Boone earned 13 kills and two blocks as well as being named Player of the Game. Amador led the defense once again with 19 digs.

FMU traveled to Savannah, GA, on Wednesday, Sept. 24, where they lost in straight sets to defending conference champions, Armstrong State.  The Patriots bounced back, however with a tense five-set victory over UNC Pembroke on Saturday, Sept. 27.

After a string of away matches, the Patriots return to the Smith University Center on Oct. 10 to face PBC opponent Columbus State University.  The first serve is set for 7 p.m.