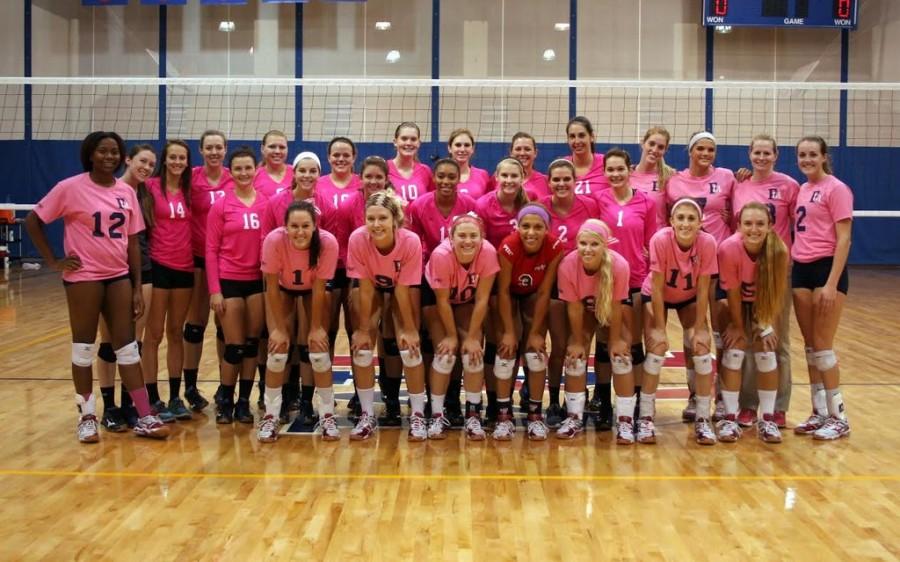 The Dig Pink match is an annual event to raise funds as well as awareness for breast cancer.  Over 500 spectators filled the seats to support both FMU volleyball and breast cancer awareness.  The proceeds from all donations benefit the Side-Out Foundation. The foundation’s name underscores the purpose of the organization – “Side-Out” in volleyball occurs when one team wins a point while its opponent is serving, thereby regaining serve or control of play.  Likewise in the war against breast cancer, the Side-Out Foundation will support health care professionals in their pursuit of practical solutions for women and men with this dreaded disease thus enabling those affected to regain control of their lives and live them to the fullest.

The Bulldogs led during the opening set, but kills from Boone, Reed and freshman Megan Fajman put the Patriots out in front for the remainder of the set.  In the second set, FMU was winning big 22-12, but Barton fought back to within just a few points.  It was too little too late as FMU claimed the victory 25-20.  In the third set, both teams battled for the entire match.  The Patriots had a late lead, but Barton rallied to tie the match 24-24 and again at 25-25.  A Patriot block by Smith and a Bulldog attack error provided the final score of 27-25, and gave the Lady Patriots the three-set victory.

After the match, junior Briana West talked about what it meant to be able to dawn the pink jerseys in efforts to raise awareness about breast cancer.

“It’s great both teams got to wear pink… a lot our fans wore pink, our coaches wore pink, the training staff wore pink,” West said. “It’s great to be able to show our support for all those suffering from breast cancer and those who are survivors.”

The following weekend, FMU traveled to Lander University on Friday and Flagler College on Sunday.  Both matches ended in straight-set losses for the Patriots.

The next lady Patriot home match is scheduled for Friday, October 31 at 7 p.m. against Peach Belt Conference opponent Georgia College.