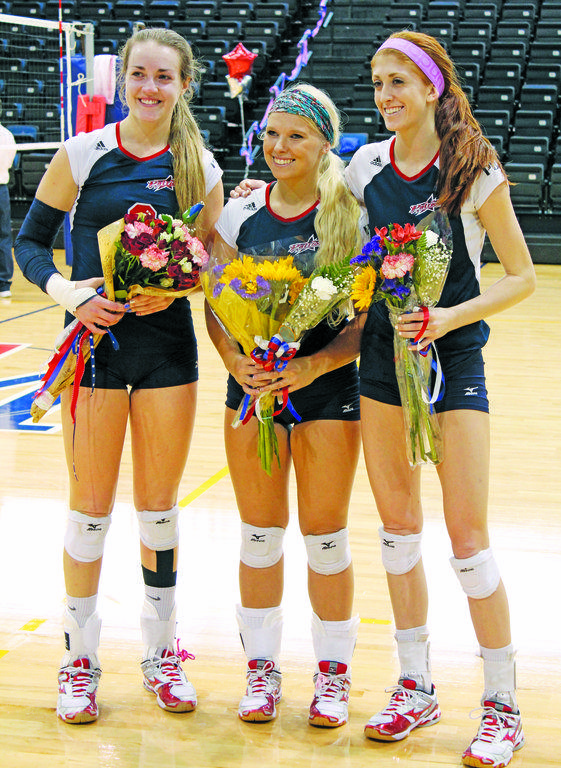 The Francis Marion University (FMU) volleyball team ended their 2014 season after Armstrong State University swept the Patriots in the first round of the Peach Belt Conference (PBC) tournament.

During the regular season, FMU held a record of 9-19 overall with 5-12 in conference play.  Their regular season outcome resulted in an eighth place seeding for the PBC tournament.  The Patriots would face the first place seed, Armstrong State University.  The Pirates are ranked twentieth nationally and hold a 25-2 record.

The Patriots traveled to Savannah, Ga. on Tuesday, Nov. 11 to face off against the Pirates in the hopes of extending their postseason.  Being the higher seed, Armstrong earned the right to host the playoff match.  Armstrong did not waiver when facing a determined FMU squad and swept the Patriots in straight sets (25-15, 25-20, 25-19).

In the opening set, Armstrong hit for .500 as a team with 15 kills on 30 attempts with no errors, helping them to secure an easy 10-point victory.  The second set saw the Patriots staying even with the Pirates to start.  About midway through the set, Armstrong used a 9-4 run to take the win.  FMU fought back in the third set, leading late in the game 18-17.  Another point run by the Pirates dashed the postseason hopes for the Patriots and Armstrong took the match.

During the contest, sophomore middle blocker Caroline Boone led the Patriots with 10 kills and four blocks, while senior Shelby Jones hit for a match-high .625 hitting percentage.  Jones had five kills on eight attempts with no errors. Defensively, junior libero Jessica Amador led both teams with 17 digs.

Jones transferred here from Arizona Western College and played for three years as a Patriot.  Her career totals include 230 kills and 135 blocks.

West has played all three years of her career at FMU.  West is graduating one year early with a degree in psychology.  As a defensive specialist, West totaled 299 digs, 160 of them coming from this past season alone.  West also earned PBC all-academic honors this year.

For the seniors, the end of the season marks the end of three careers, a feeling that is bittersweet for West.

“Stepping off the court for the last time you start to realize how much of your life you are leaving behind,” West said.  “[Volleyball] has given me many wonderful opportunities…I will always be thankful for being able to play a sport I love for as long as I have.”

Jones shares similar feelings with West, knowing they are very fortunate to play a collegiate sport.

“Playing for FMU has been a privilege,” Jones said. “My time here seemed short but I couldn’t imagine finishing my career with any other team. I’ve learned a lot about myself while being here and had the opportunity to fulfill my dreams of playing college volleyball.”