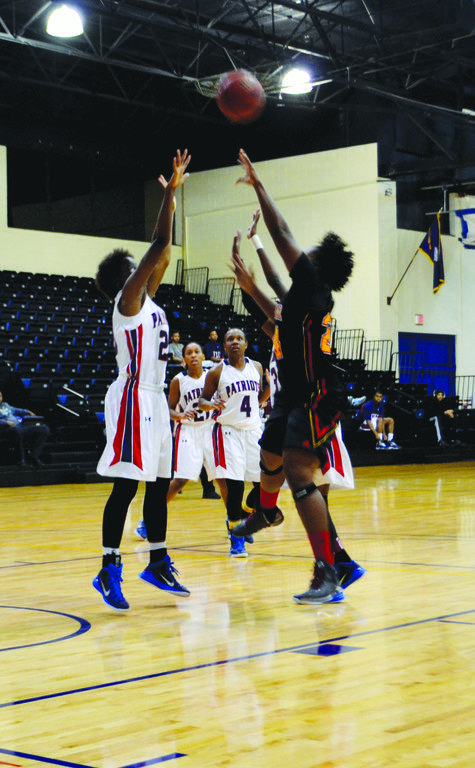 Respect is what the Francis Marion University (FMU) Lady Patriots demanded on Wednesday Jan. 7 when the Flagler College Saints paid a visit to the Smith University Center.  The Lady Patriots stomped the gas right from the opening tip, jumping out to an eleven-point lead and opening the game with a 13-2 run. The patriots never took their foot off the gas pedal and continued to make shots until the final buzzer.

Junior Forward Alaysia Watts might have been the one who tallied the most points for the Patriots at the end of the night but it sure wasn’t a one-woman show. The Patriots had four players in double digits including Watts who finished with a career best 11 points. Senior Cy’erra Mills finished with 10 points and the two newcomers, freshmen Stephanie Brown and Khayani Chandler also helped carry the Lady Patriots to victory with 10 points as well.

Flagler played tough and attempted to hang in the game with their senior guard Treva Mason leading both teams in scoring with 17 points when the final buzzer echoed throughout the University Center. Her impressive performance wasn’t enough to even slow down the determined Lady Patriots.

In the second half the lead for Francis Marion University was nothing shy of 13 points. Flagler College was fighting a losing battle and the fans knew it as the game went on the home crowd enjoyed every second of it.

Watts had a few words to say after the game about her performance and had even more to say about the team as a whole. She is expecting to carry the momentum from this win into the next couple games and hopefully get on a streak. Head Coach Jay Sparks on the other hand seems to want to focus on good fundamental play on defense and turn strong defensive stops into points on the offensive side of the ball more in the future.

The Patriots played into exactly what Coach Sparks wanted to do against Flagler forcing 25 points off turnovers and also forcing Flagler to shooting only 30 percent from the floor and making only three shots from behind the arc. The lady Patriots however had a good day on offense shooting about 42 percent and doubling the Flagler College total from the three-point distance. FMU also had 30 points from the bench as all available players got into the action. It was a true team effort. An effort good enough to cement them a spot in third place of their conference and a good chance to improve as they look forward to conference matchups this week that will start with a road trip to Armstrong State University and finish at home with a clash against Young Harris on Saturday, Jan. 17 at 1:30 p.m.