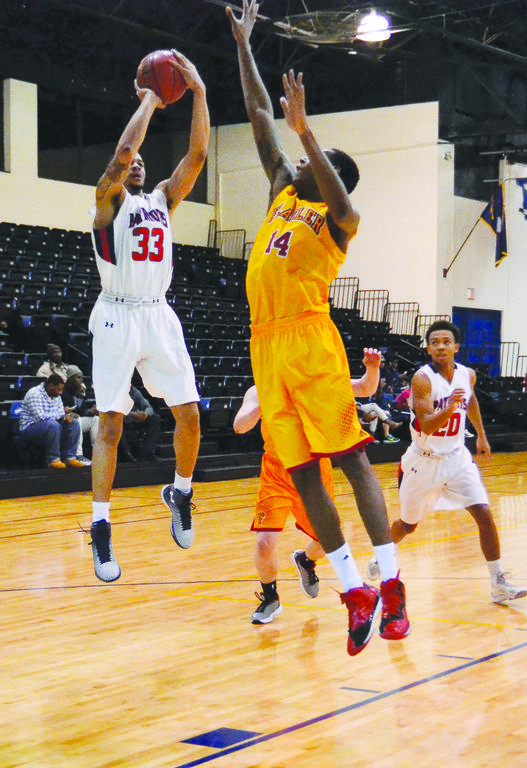 The Francis Marion University (FMU) Patriots took to the hardwood on Jan. 7 against the Flagler Saints. The Patriots looked to start off the new semester with a bang and capture their first Peach Belt Conference (PBC) win, but instead they were left dumb founded after the Saints came marching into the Smith University Center and escaped with a late 83-78 victory.

The Patriots came out of the gates hot going on a 10-0 run and forcing the Saints to use a very early timeout. After the Saints regained their composure they punched back. Flagler College, who was also fighting for their first conference win, shot an impressive 75 percent from the floor in the first half. They were led by the performance of their senior guard Jerrell Oxendine who finished the game with 23 points and was the man with ice in his veins while shooting the final four free throws that would cement the victory for the Saints.

In the post-game interview coach Gary Edwards summed it all up when he said “we just didn’t make the plays down the stretch.” Edwards also spoke repeatedly about the heart and determination his team has.

The Patriots fell in a hole to the Saints after the early timeout and Patriots played impressive defense but they were no match for the lights out shooting of Flagler College. FMU was trailing by nine at the half. The hot hands didn’t cool off for Flagler in the second half, as they would increase the lead to 17 with about 14 minutes remaining in the game. Many home spectators were rolling their eyes and making their way for the door until Francis Marion put their unrelenting character on display and would chase the Saints until finally capturing the lead for only the second time during the game at 70-69.

The hard defense and fight of the Patriots set up the game for a fantastic finish.  FMU Junior Dii’Jon Allen-Jordan led the attack for the patriots with 23 points and a perfect 9-9 from the charity stripe. Detrek Browning was his second in command with 18 points. The Patriots forced 25 turnovers and scored equally as many points off them.

In the last minute the Patriots were down by three and had two good looks from beyond the arc but were clanged off the orange iron and left the Patriots with a sour taste in their mouths for the fifth game in a row.

Heads were hung and hands were shook as FMU fell to 0-5 in conference play and 7-6 overall. They will hope to turn it all around with a PBC conference home stretch that will start on Monday Jan. 12 and finish with a clash against Young Harris on the following Saturday.