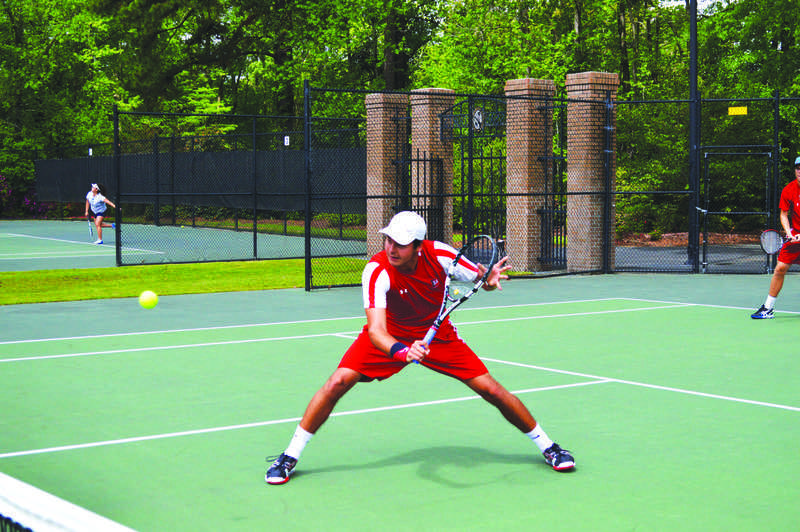 The FMU men’s and women’s tennis teams defeated Bluefield State College; men were 5-4, and women were 8-0 in non-conference play on April 18.

In the Patriot’s first time playing the Bluefield Big Blue, the men and the women swept the courts in afternoon matches.  The women won all their matches against the Big Blue, and the men’s No. 1, Richard Ashforth, No. 4, Gavin Davison and No. 5, Marius Whallier, won in singles.

Ashforth defeated Platon Gud in a tiebreak match for the win.  Ashforth won his first set 6-4, and he ended his second set 7-4 winning a tiebreak match.  This win brings his record to 15-2 for his sophomore career. Ashforth is ranked No. 13 in the nation.

After this match, FMU men’s tennis team has an 8-9 record and they stand ninth in the Peach Belt Conference (PBC).

The lady Patriots won all their matches against the Big Blue, bringing their record to 10-8.

Three of the singles matches and one of the doubles matches ended in a straight sweep.  No. 1 Samantha Koelliker, No. 3 Mona Piller and No. 4 Sofia Henning all won their sets 6-0, and doubles partners, Henning and Christina Graf, won their match 8-0.

No. 2 Julia Graf continued to move up in the rankings for the Patriot career list for singles and the career victories list.  She is in third place for career victories with a 68-21 record and tied for second with Lee Whitwell with her 67-11 singles record.

Freshman Taylor Whisnant, No. 6, won her singles match after splitting her sets 2-6, 6-2 and playing a tiebreak match.  Christina Graf won her no. 5 singles match 6-1, 6-1, contributing to the Patriots win over Bluefield State College.

The Patriots women’s team stands ninth in the PBC and thirtieth in national standings.

The men’s and women’s tennis teams ended the 2015 season April 20 against Flagler.