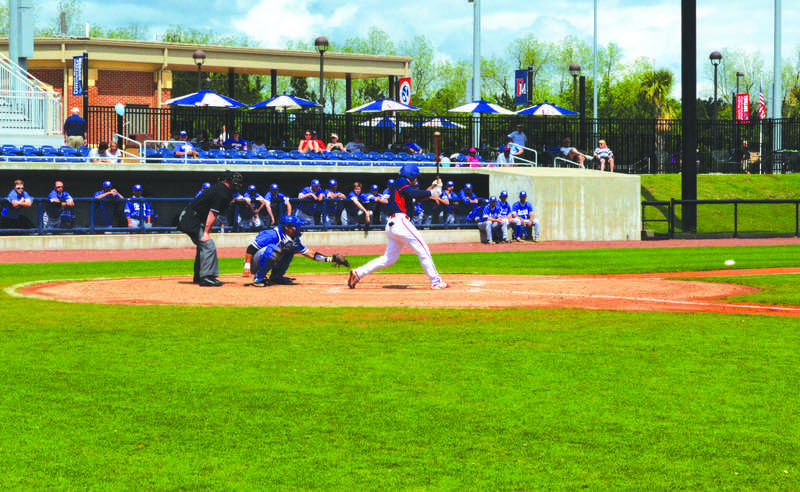 FMU defeated the Peach Belt Conference (PBC) rival University of North Georgia (UNG) Nighthawks with a 5-4 victory during the first game of the double-header on Saturday, April 18.

However, the Patriots fell short in the second game with a final score of 5-2.

Down 4-1 in the seventh inning of game one, junior center fielder Casey Clauss delivered the first of FMU’s two-out runs.  The Patriots were also aided by a UNG fielding error which allowed sophomore shortstop Zach Callahan to score on Clauss’ hit to bring the score to 4-3.

With 1,014 people packing the stands, senior reliever Jordy Santak retired the Nighthawks in the eighth, setting the table for FMU to seal the deal in the bottom of the frame.

Shortstop Connor Hoover paced UNG’s offense in game one with a 2-for-5 effort.  Rubino’s 2-for-4 output led FMU’s regulars.

In the second game, UNG gained an early 1-0 advantage over the Patriots.  But UNG starter Dylan Peppers and FMU starter Daniel Barfield settled in and quieted the offenses as neither team scored again until Loew’s RBI single tied the game at 1-1 in the fourth.

The Nighthawks claimed the lead in the following frame on a run-scoring single by second baseman Joey Cecere and an RBI sacrifice fly from Hoover.

UNG added a tally apiece in both the seventh and ninth innings while holding the FMU offense at bay.

After plating one run in the eighth on a bases-loaded walk by junior designated hitter Shuler Ward to pull the score to 4-2, the Patriots left the bases loaded and stranded two more runners in the ninth.

FMU baseball honored Rubino, Lenns, McGee and Santak, as well as Cody Dix, Chandler Smetana and Conner Wessel in Senior Day activities prior to the doubleheader.