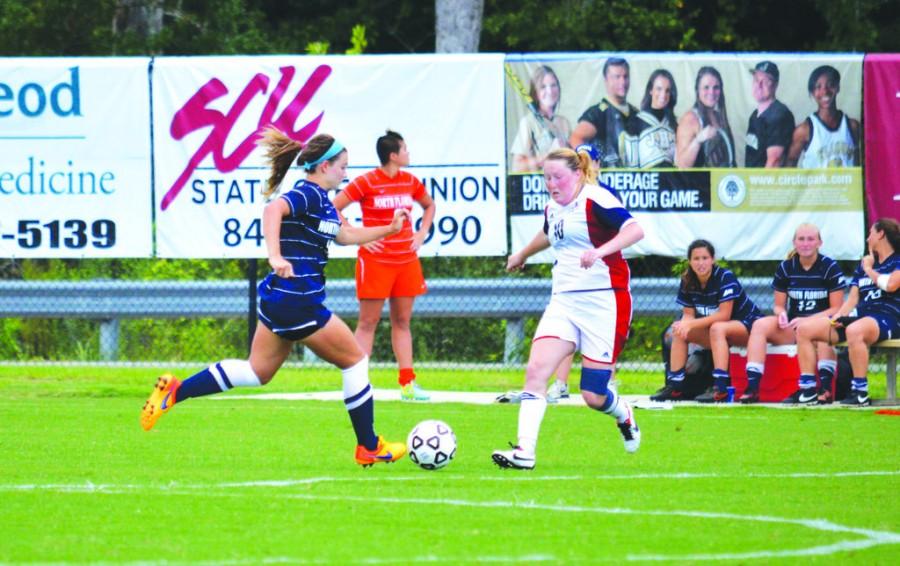 Senior mid-fielder Arianna Pierner faces an opponent from University of North Florida at the lady Patriot's season opener on their home field.

With less than a minute into the game, freshman UNF forward Krista Colubiale was the first to put her name in the stat book.

UNF continued to fight to defeat the Patriots. They pounded the ball down the center of the field, moving the ball with quick, precise passes. 27 minutes into the game, the Patriots scored on their own goal. This gave UNF a two-point lead.

UNF was up 3-0 at the end of the first half. With a few halftime adjustments, the Pats came out ready to fight in the second half. They tightened up and made it more difficult for the Osprey to score.

UNF scored one goal during the second half, defeating the lady Pats 4-0.

“I thought we had a couple of moments that we looked good in, but overall we were very shaky and unorganized,” Morgan said.

Morgan said that the team members are working on getting comfortable in their positions and are focusing on getting on the same page. The players are trying to build chemistry within the team.

Morgan said her main goal is to take games one at a time and turn the season around.

After opening with a defeat, the lady Patriots bounced back with a double-overtime win against Presbyterian College on Saturday, Aug. 23. However, victory was short-lived. On Aug. 27 the Patriots traveled to Winthrop and lost against the Eagles 2-1.