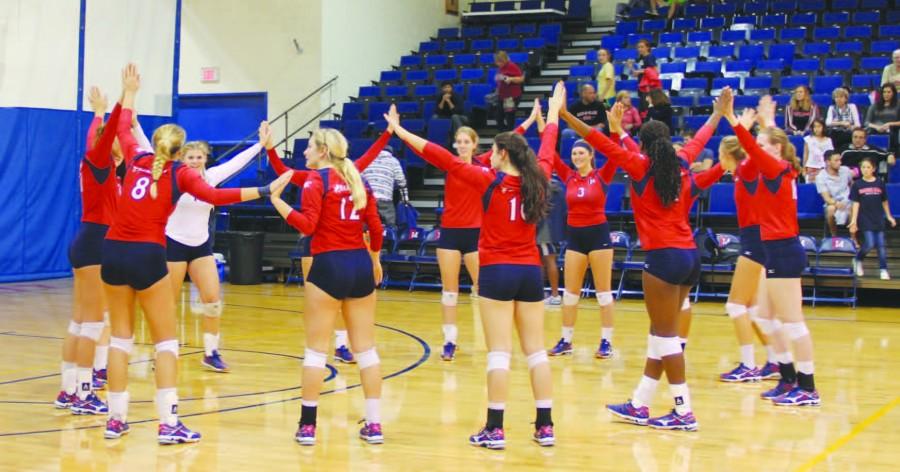 FMU Patriots get pumped up for the game by chanting and holding hands after shaking hands with the players for Georgia College.

It may have been fall break for students, but that didn’t mean that the Patriots’ volleyball team was on break.

The team was hard at work at the Smith University Center on Oct. 10, one of the two games played during this year’s fall break, against the Georgia College Bobcats.

The Patriots defeated the Bobcats with a straight 3-0 win.

Performances from the freshmen duo Georgia Garrison and Carrie McGinnis led FMU’s offensive attack. Garrison finished the game with 13 kills and 12 digs on the defensive side. The other half of the duo, McGinnis, and junior Caroline Boone finished the match Saturday with 26 assists.

Rounding out a memorable weekend and making a career-high 37 digs against Tusculum College on Oct. 9, sophomore libero Shelbi Meek led FMU against Georgia College by digging up 18 balls.

FMU was unable to keep the lead the second set when the Bobcats made a comeback late in the game. The score was 25-24 with the Bobcats winning when they made a mistake that allowed the Patriots to go on the offensive. Boone and Garrison drove home the second set by getting the final two kills that would push the Patriots past Georgia College with a close 27-25 win.

FMU continued to lead the match to win 5-4 in the third and final set. Although the Bobcats were making a comeback in the final minutes of the game, the Patriots didn’t relinquish the lead over them. Reed and Smith finished the set and won the game with the final two kills.

Georgia College was led by freshmen Ebony Powers and Kayla Brockway. Powers led her team in kills, tallying 10 of them. Brockway finished the game with 28 assists.

The Patriots won with the best hitting percentage of the season at .307. The Patriots are now ranked 7th in the Peach Belt Conference.

The team’s performance improved the Patriots’ season to an even 4-4 record and an 11-7 overall.